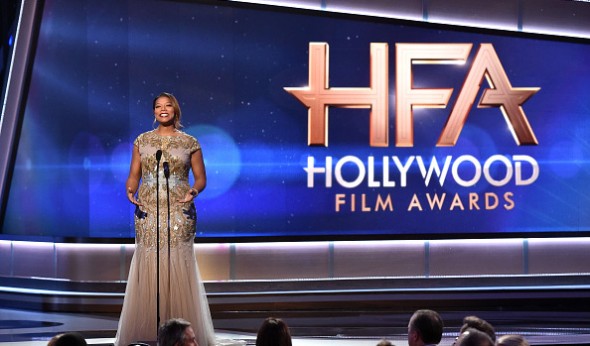 On Friday, November 14th, 2014, the 18th annual Hollywood Film Awards was televised for the first time on CBS. Hosted by Queen Latifah, the ceremony took place at the Hollywood Palladium and marks the beginning of award season. A noncompetitive event whose winners are pre-announced, the Hollywood Film Awards carries a slightly negative connotation, often rewarding films that have yet been publicly released. Founded by an events-programming CEO, the industry joke with the HFA is that nobody knows about it; wins are chosen by 12 anonymous people. Given this year’s outcome, which included a clearly inebriated Johnny Depp, jokes about Ben Affleck’s junk, a Kristen Stewart nip slip, and even a joke from the host, who sardonically asked, “Did I miss the first 17 Hollywood Film awards?” the evening was surely as bemusing to its audience as it was to its participants.

– All above photos are by Getty Images, unless otherwise noted.