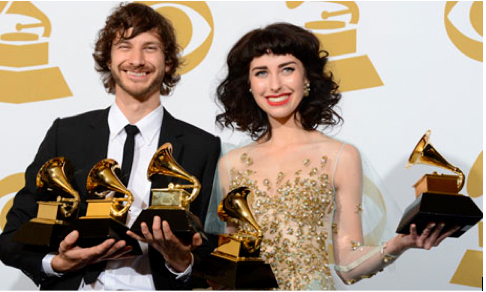 The 55th Annual Grammy Awards catered to a younger generation of artists, with some surprising wins. Rock band Mumford and Sons was awarded the top honor with album of the year and New York indie band fun. received the award for best new artist, also winning song of the year with their hit “We Are Young.” Guitarist—and boyfriend to Lena Dunham— Jack Antonoff joked that the unforgiving hi-def coverage would reveal that in fact “we are not very young.” Australian electronic pop artist Gotye won record of the year for “Somebody That I Used to Know,” his infectious collaboration with New Zealand pop singer Kimbra. “Somebody I Used to Know” was one of the biggest-selling singles of 2012 and has racked up over 200 million YouTube hits. Ohio group The Black Keys had a good night, taking home three awards, including best rock song, rock album and rock performance. 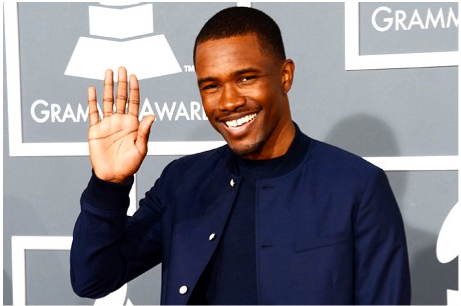 Frank Ocean came out on top over real-life rival Chris Brown when his critically acclaimed solo debut album, “Channel Orange” won for the urban contemporary album award. Ocean and Brown were involved in a parking-lot scuffle outside a West Hollywood recording studio last month, during which a homophobic epithet allegedly was directed at Ocean, who has acknowledged a same-sex relationship. Ocean’s jacket slipped up at the wrist when he reached to accept the award, revealing a cast he’s wearing due to the incident.  Ocean also won alongside Kanye West, Jay-Z and The-Dream in the rap-sung collaboration category for their single “No Church in the Wild.” 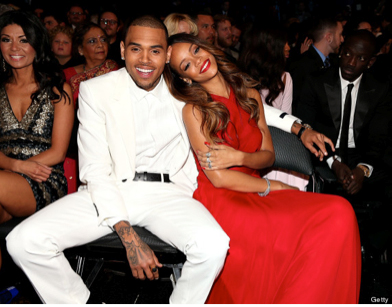 The notoriously hotheaded Brown and girlfriend Rihanna caused a stir, looking cozy for photographers all night long. The controversial couple picked a very controversial night for their flagrant P.D.A. Last night’s Grammy Awards marked the four-year anniversary of their infamous domestic dispute, which occurred while they were driving home from Clive Davis’ Grammy party.  Many people perceived their behavior last night as shameless, all things considered. Twitter went wild with the opinions of the morality-policing public, although some fans pledged their support to the couple. Fueling the fire, a flashy ring glinted on her left finger, leading to online speculation of an engagement. 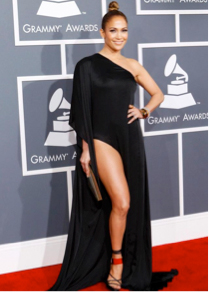 Despite the fact that CBS issued a hilariously-worded memo prior to the awards show urging stars to “please be sure that buttocks and female breasts are adequately covered” and avoid risky wardrobe choices on the red carpet, Jennifer Lopez refused to demure to the establishment. “They didn’t say anything about leg,” she quipped coyly to E!, clad in a floor length black dress with a mile-high slit. The singer, actress and mother of twins looked fabulous in the revealing number. 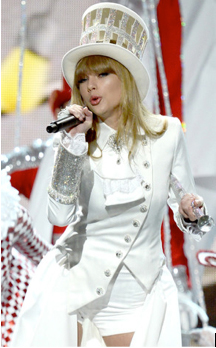 Taylor Swift attempted to let her freak-flag fly, trying a seemingly Lady–Gaga-inspired opening performance of “We Are Never Getting Back Together.” Wearing a campy white ringmaster suit and top hat, Swift looked like something out of “Alice and Wonderland,” accompanied by dancing rabbits, clowns, and people on stilts.  If that wasn’t weird enough, the guy strapped onto the spiral target board in her performance looked a little too much like Jake Gyllenhaal, considering the song was reportedly written about him.

– Erika Broad for The Untitled Magazine