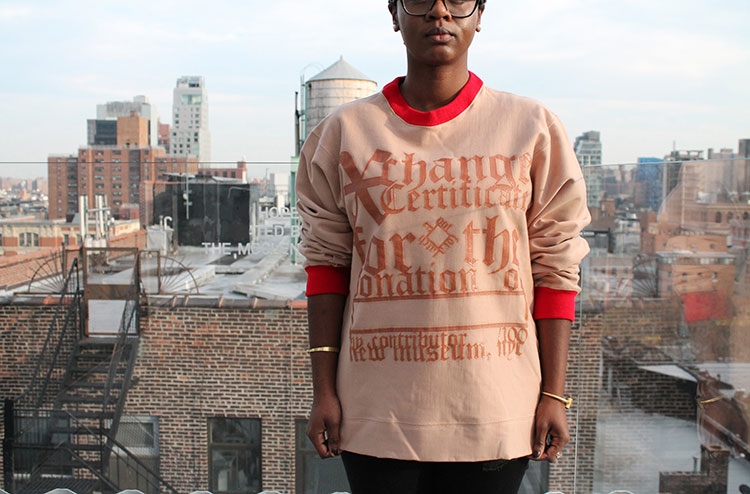 The New Museum will host the first solo museum presentation in New York of the work of artist Pia Camil (b. 1980, Mexico City). A Pot for a Latch, Camil’s new sculptural installation created specifically for the Lobby Gallery, will be on view January 13–April 17, 2016. For the inaugural A Pot for a Latch Exchange Day, on December 17, 2015, from 5 to 9 p.m., New Museum visitors are invited to exchange their own unique items for a sweatshirt,designed by Camil in collaboration with Lorena Vega. The event will conclude at 9 p.m. or once all one hundred sweatshirts have been exchanged. Exchange days will also be held in February, March, and April.

The title of the exhibition refers to the potlatch, a ceremonial gift-giving festival practiced by the Native-American peoples of the Pacific Northwest coast, for whom it was a central system of wealth redistribution. Inspired by the modular display systems used by commercial vendors, the artist will create a succession of gridwall panels with built-on fixtures commonly intended for store display. Composed of grids, lines, and geometric shapes, the structure will form a volumetric drawing within the space of the Lobby Gallery, referencing cheap commercial constructions as well as the serial patterning in paintings and sculptures made by Minimalist artists such as Sol LeWitt and Agnes Martin. Camil will invite the public to participate in the ongoing creation of her piece, encouraging visitors to exchange their own unique items for others in the installation, thereby transforming the gallery into a “shop” in which the monetary value of an object is supplanted by its personal history and significance.

For more information about the exhibition and how to participate in Exchange Days, click here.