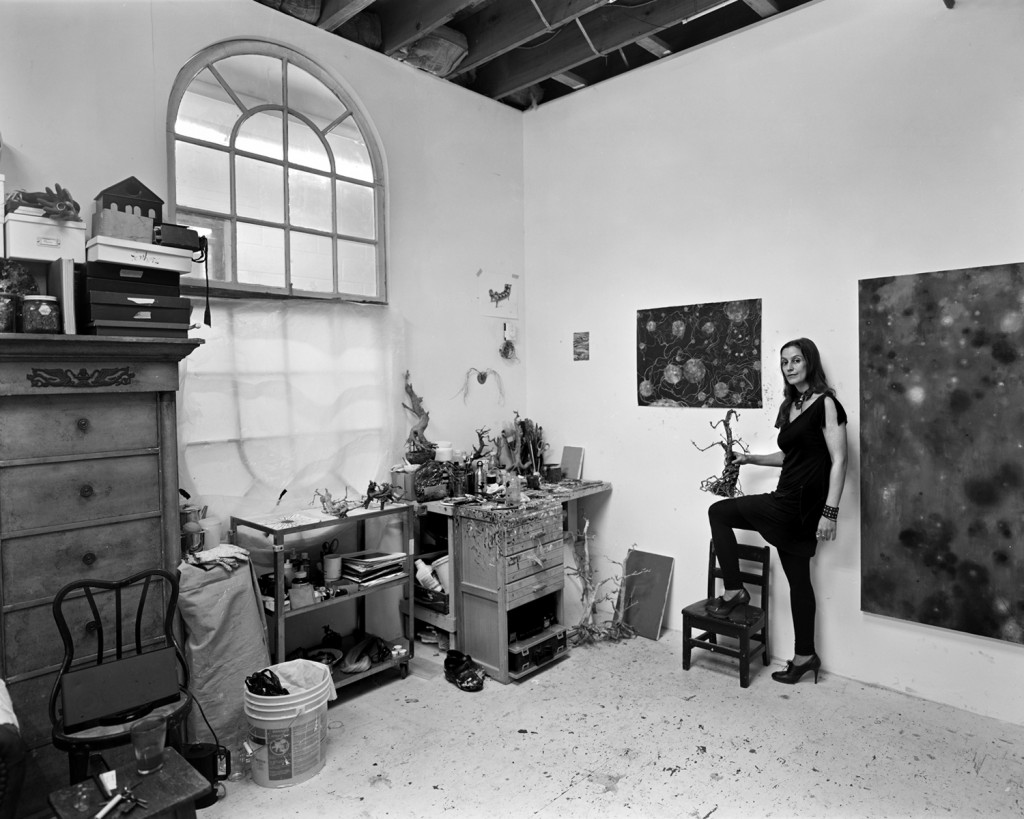 Walking up the stairs at 551 West 21st street, you get the feeling that someone’s been painting.

In fact your olfactory sensors will be on high alert as you climb the narrow staircase. And you will in your curiosity, wonder at the source. Is the aroma perhaps, you ask yourself, emitting from one of the artist’s studios? Could it be coming from one of the four galleries occupying the building? Or, is this scent of paint simply a product of the staircase beneath your feet. Each step—heavily plastered—will creak with an eerie sense of nostalgia.

Climb the stairs to the top floor, the fourth floor, and you will reach a long, grayish hallway illuminated by some overhead florescent light. Occasionally, a large sink will mark the edge of a path, but if you turn just when you think you should not, you will reach Studio 408a, a small rectangular room with a skylight window and child’s chair. A low sofa welcomes guests by the entrance, across from which a corner, flanked by two big paintings of the sky, pokes a harsh shadow through the overhead light.

This studio belongs to artist Daphane Park. And, just a few Thursdays ago, during the building’s last Open Studio (which occurs on the first Thursday of every month from 6-8pm).

Daphane is one of the more long-term members of the community; at least long-term enough to call the space “cold castle”, although according to Daphane, the building just “might get heat this year”. Her studio consists mostly of work from the last year and half. Some small drawings hang from the far wall next to a cabinet in the corner. Inside the cabinet, paintings and canvases wrapped in bubble tape align side by side. But on top of the cabinet, a rather strange pile of pink and brown material pours through a laundry bag framed by a broken ukulele. 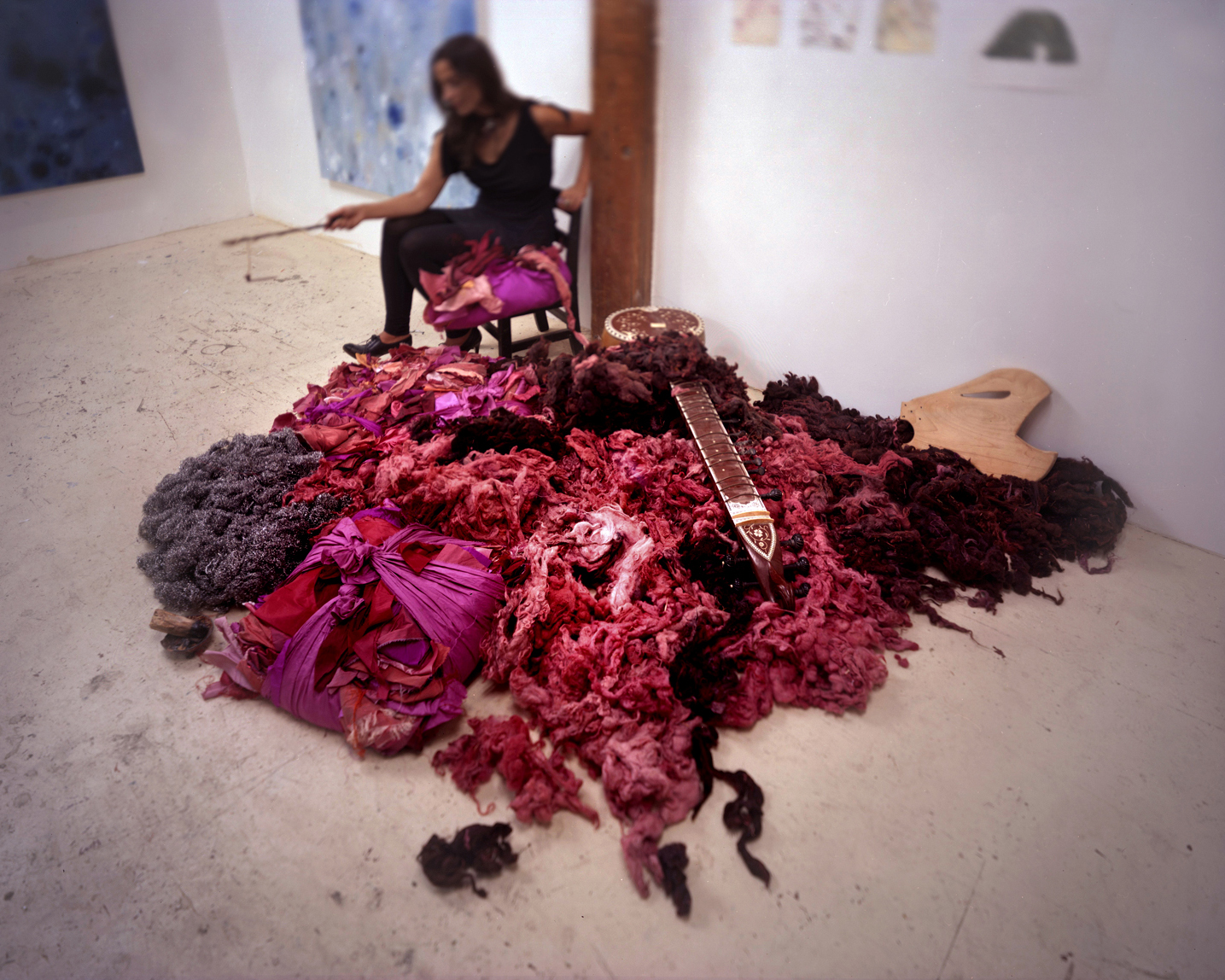 These are the remnants of Hammock Mother, a part of one of Park’s installations that was vandalized within the first four hours of display.

But, to understand Hammock Mother, you have to understand the larger installation of which it was a part. Once described as a “looming architectural structure resembling a wigwam or double volcano,” Superconductor was created from raw wool, silk, steel wire, and other materials, which Park crafted under the technical principles set forth by Freudian peer Wilhelm Reich (psychophiles might recall Reich’s Orgone Accumulator, a metal-lined device built to trap orgone energy for the advancement of psychiatry and other such disciplines). Park also added performance objects to Superconductor, including a soundtrack with a composition written by David Marshall, Rachel Bell, and Derrick Barnicoat; a daily three-hour performance; the rebuilding of abandoned guitars; and finally, Hammock Mother, a hammock made by Park and a group of indigenous friends in the Upper Amazon. 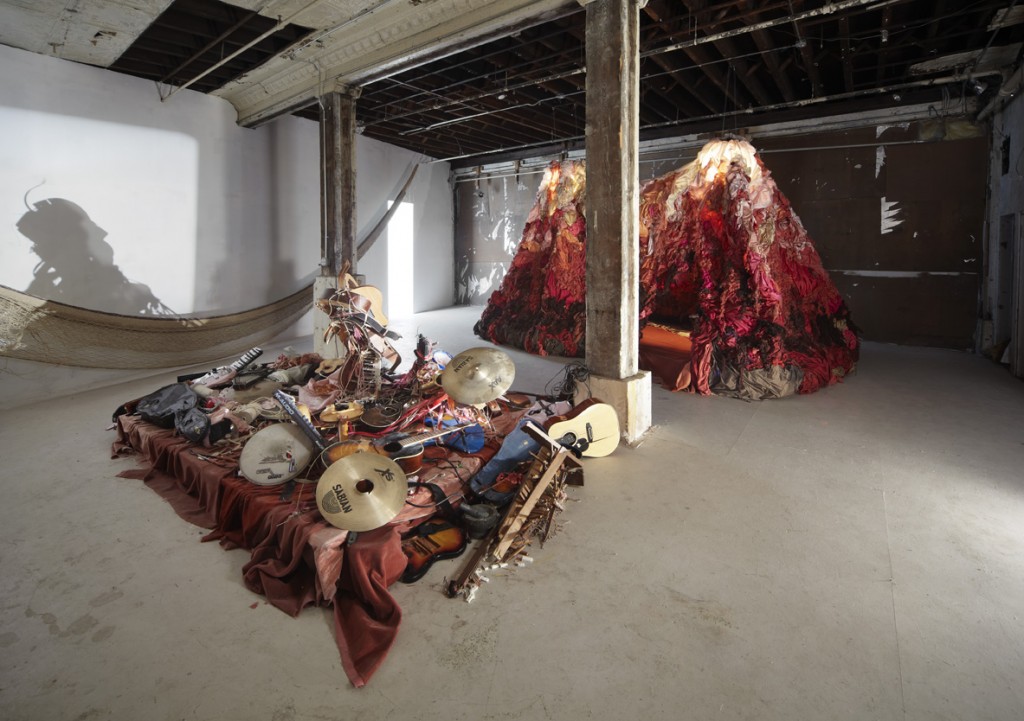 The Zapara people of the Amazon were first introduced to Daphane Park in late 1990s, when she was living in Ecuador. In an email, Daphane described her first encounter with Gloria, a key member of the Zapara community: “I met Gloria in 99 in a botanical garden on the entrance to the interior Ecuadorian Amazon. We kept in touch as she began organizing politically and traveling to the US to speak on behalf of her people at the UN permanent forum on Indigenous Issues.”

Daphane was touched by the Zapara beliefs and practices. Recognizing that it was a dying culture, Daphane felt urged to battle the Zapara extinction, “I would help in whatever way I could,” she said. And so, a few years later, Daphane and the Zapara people started building a hammock. It was, according to Daphane, an attempt to “bring some kind of awareness to…the issues of the survival that the Zapara and many of the indigenous communities are facing.” In a recent conversation, Daphane considered the lighter alternative: “Maybe it was my statement of like, have a hammock orgy and not war kind of thing.”

Unfortunately, the hammock was vandalized within the first four hours of being on display in New Orleans. But Daphane handled it well. Instead of giving up, she decided that this random act of violence against her artwork was not bad; rather, it served as a symbol of the Zapara’s daily challenge for cultural survival.

Not all of Daphane’s artwork serves as a political statement. About a year and a half ago, she completed a “Mother Earth” painting, inspired by the introduction of the Funkadelic record “Maggot Brain.” The painting, which stands between an interesting dichotomy of perfect technique and extreme playfulness, features a green woman with sunglasses. She wears a skirt made of thick paint and crushed up minerals, semi-precious stones, and costume jewelry left behind by Daphane’s grandmother. 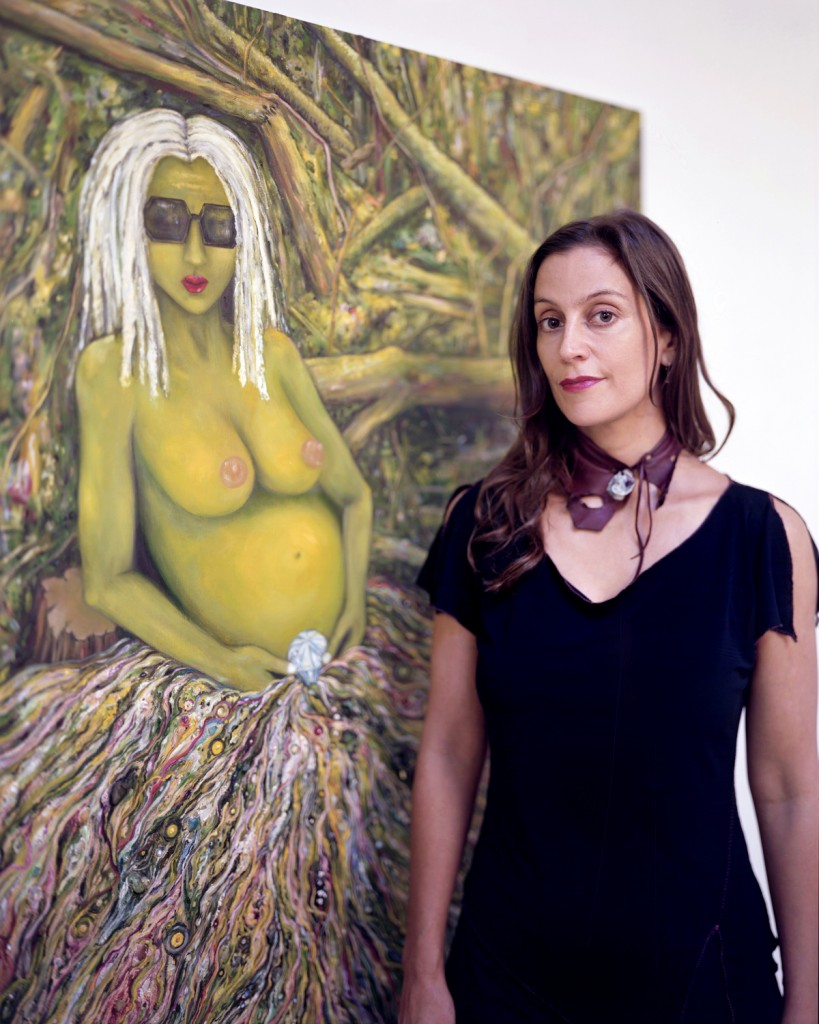 “She is a kind of icon painting,” said Daphane, who later told me that she did indeed paint this from the child’s seat in her studio.

Daphane is also writing a book, although if you ask her, she is “un-writing” it. 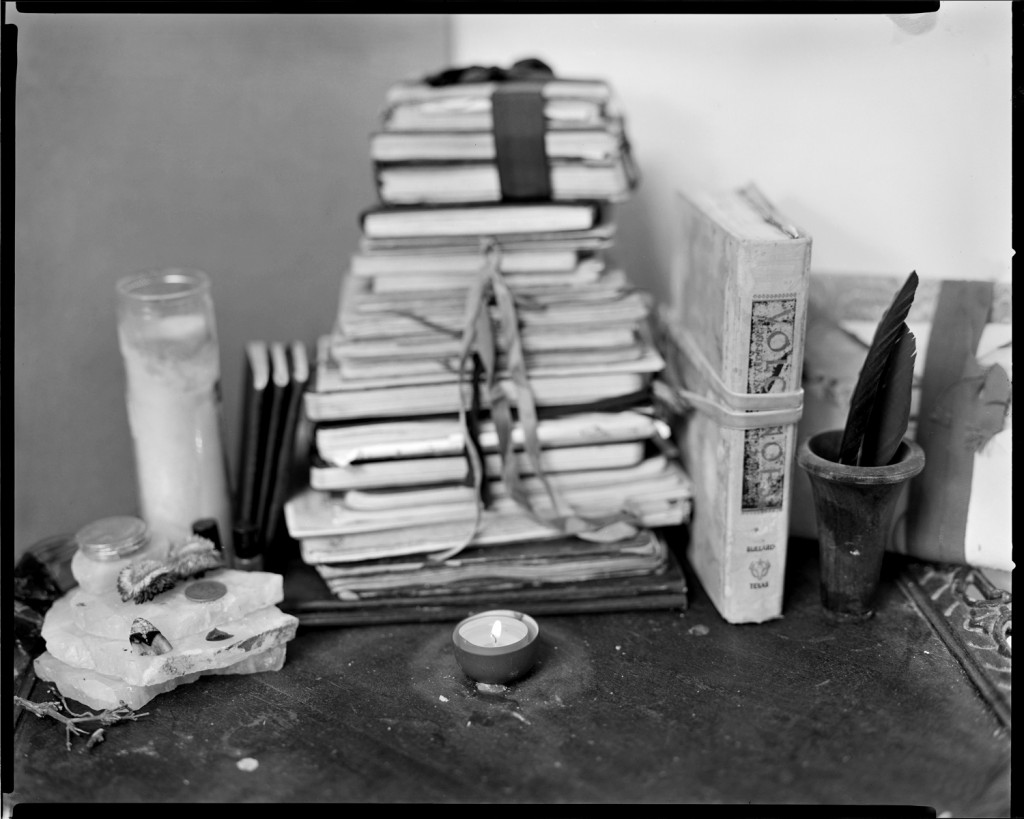 A decade ago Daphane acquired a book on volcanoes, which she is now decorating with drawings, collages and lines of paint, while circling words that speak to her. “It’s a kind of meditation on volcanoes,” she says.

Recently, Daphane has moved to more abstract, “less narrative” work, as reflected by the two large blue paintings currently hanging in her studio. But the work remains equally, if not more powerful without a narrative.

“I have been asking myself ‘what is it all about?’ What is the thread that runs through all of the work? It all comes down to energy. They are all a kind of mediation. And, meditation is what unlocks energy, I suppose,” said Daphane. 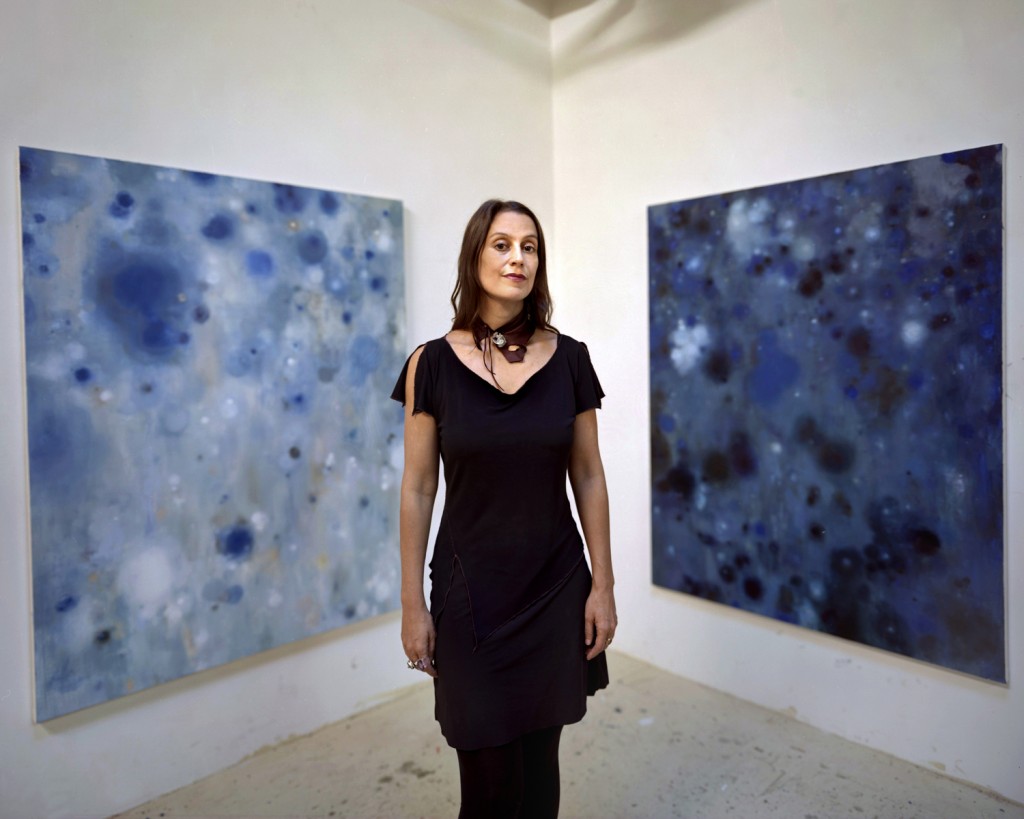