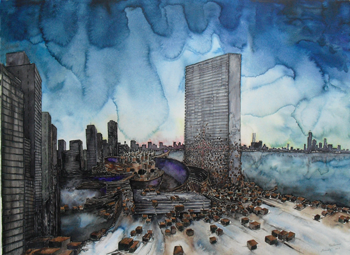 A Spectator on the Stands of History

(Art) Amalgamated‘s exhibition, A Spectator on the Stands of History, is open to the public from July 25th.

The group exhibition brings together a diverse group of artists, with the resulting dialog reflecting hope, fear, transition, homage to the past and a glimpse of the future.

Artists featured in the exhibition:

Peter Beard, an artist based in New York, Montauk and Kenya, has been widely known for photographs of Africa, African animals, celebrities. He has documented the history of his relationships with Africa, Karen Blixen, the New York art scene, the fashion world, Hollywood, and the Kennedy administration. In addition to creating original artwork, Beard has befriended and collaborated on projects with many artists including Andy Warhol, Andrew Wyeth, Richard Lindner, Terry Southern, Truman Capote, and Francis Bacon. In 1996, shortly after he was skewered and trampled by an elephant, his first major retrospective opened at the Centre National de la Photographie in Paris, followed by other exhibits in Berlin, London, Toronto, Madrid, Milan, Tokyo and Vienna.

David Birkin, a British artist who currently lives in New York, explores the language of loss in both the private and political domains and deals with limitation of visibility, combining original and appropriated imagery with a conceptual approach. He was the recipient of the Sovereign Art Prize (Barbican, London), Celeste Art Prize (Museo Centrale Montemartini, Rome) and a National Media Museum bursary, and has exhibited at the Courtauld Institute, London; The Photographers’ Gallery; and Saatchi New Sensations. His work was recently shown at the MoMA PS1 Rockaway Dome as part of Expo 1: New York. He will begin the Whitney Museum’s Independent Study Program in September 2013.

Vitaly Komar and Alexander Melamid are Russia born, New York based, conceptual artists who collaborated to produce artworks from 1973 to 2003. They are perhaps best known as the founders of SotsArt (СоцАрт), a form of Soviet Nonconformist Art that combined elements of Socialist Realism and Western Pop Art in a conceptual framework that also references Dadaism. Komar and Melamid also collaborated with other artists, for example, Douglas Davis, Fluxus member Charlotte Moorman, Andy Warhol, among others. Their first international exhibition was at Ronald Feldman Fine Arts, New York, in 1976. Since then, they have had numerous public commissions and exhibitions throughout the world. Their works are in the collections of The Museum of Modern Art, New York; The Metropolitan Museum of Art, New York; the Solomon R. Guggenheim Museum, New York; and The Victoria and Albert Museum, London.

Peter Rostovsky, a Russian-born, New York-based artist, whose work represents the artist’s attempt to reconcile a deep interest in history with a keen interest in recording the immediate world around him. He was selected for the Whitney Museum Independent Study Program and has exhibited widely both in the United States and abroad including such venues as the Walker Art Center, MoMA PS1, the ICA in Philadelphia, SMAK Museum in Ghent and Rauma Biennale Balticum in Finland. He currently teaches painting at NYU.

Rob Voerman is a Dutch artist who creates futuristic communities that construct simultaneous visions of utopia, destruction, and beauty that reflect on a rapidly changing society. He has exhibited internationally, including solo exhibitions at the Cobra Museum, Amstelveen, Netherlands, Bregenzer Kunstverein, Bregenzer; and the UCLA Hammer Museum, Los Angeles, and many group exhibitions at venues such as University Art Museum, Santa Barbara, Generali Foundation, Vienna, Austria; Museum voor Moderne Junst, Arnem, and in the permanent collection of the Museum of Modern Art, New York.

Monika Weiss is a Polish-American artist based in New York whose trans disciplinary work examines relationships between body and history and evokes ancient rituals of lamentation. Weiss works in video, sound, drawing, sculpture and performance, often combining various media together into large-scale public installations. Originally educated as a musician, the artist continues to compose sound in her work. Most recent solo exhibitions include Museum of Memory and Human Rights, Santiago, Chile (2012-2013) and Centre for Contemporary Art Ujazdowski Castle, Warsaw, Poland (2010). In 2005 Lehman College Art Gallery (CUNY) organized a retrospective of the artist’ work and in 2009 she was awarded a NYFA fellowship. Weiss work has been featured in group exhibitions internationally, including CIFO Cisneros Fontanals Art Foundation, Miami, Kunsthaus Dresden, and Frauenmuseum, Bonn.