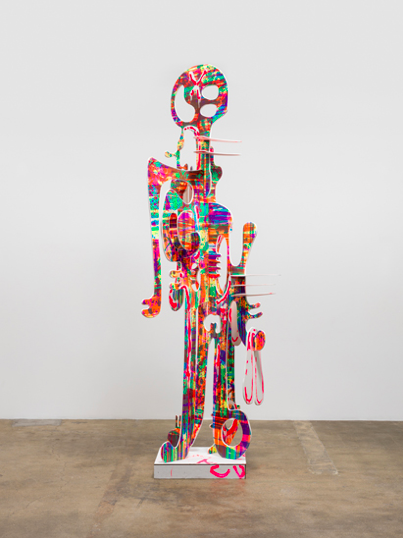 Almine Rech Gallery is pleased to announce Aaron Curry’s first exhibition in Paris. Aaron Curry was born in San Antonio, in 1972, and currently lives and works in Los Angeles. In 2010, he was awarded the Guna S. Mundheim Fellowship in the Visual Arts at the American Academy in Berlin. His works have been exhibited across the US and in Europe, including solo exhibitions at the High Museum of Art, Atlanta; Schinkel Pavillon, Berlin; Kestner Gesellschaft, Hannover; Galleria d’Arte Moderna e Contemporanea, Bergamo; and Ballroom Marfa, Marfa, TX. His works were featured prominently in the recent group exhibitions Alexander Calder: Form, Balance, Joy, organized by the Museum of Contemporary Art, Chicago, which traveled to the Nasher Sculpture Center, Dallas and Orange County Museum of Art, Newport; and Statuesque, organized by the Public Art Fund at City Hall Park, New York, which also traveled to the Nasher Sculpture Center.

“Melt to Earth” a major exhibition of monumental-scale sculpture will open at the Lincoln Center in New York City on October 7th, 2013 and run through January 2014.