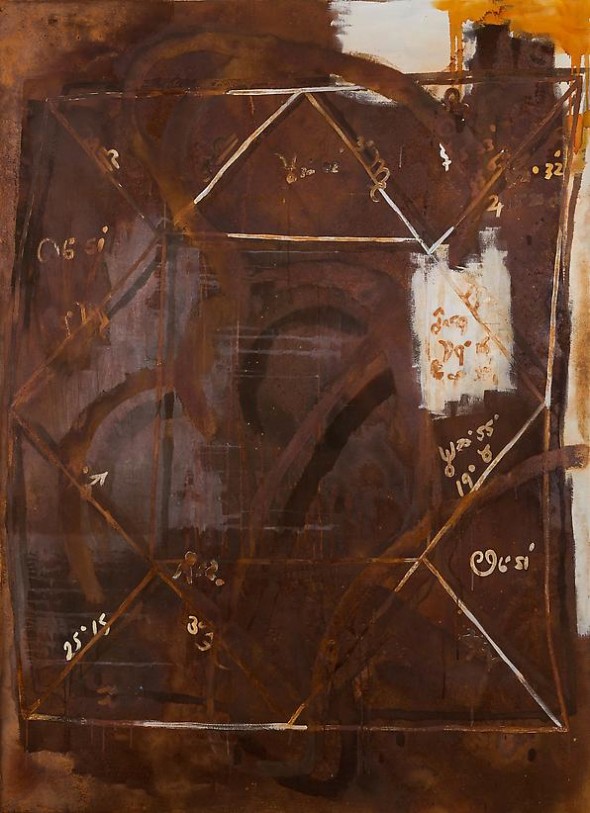 ALASTAIR MACKINVEN “FROM THE CHINESE MENU OF CHOICE, BE WARNED, THE MEAL WILL ALWAYS BE CHINESE”

It is with great pleasure that Jancou, Geneva announces its first exhibition of 2013, “From the Chinese Menu of Choice, Be Warned, The Meal Will Always Be Chinese”. Opening on January 31st and continuing through March 9th, this show will feature new works by British artist Alastair MacKinven. It will be on view in conjunction with the artist’s exhibition at the Curtat Tunnel in Lausanne, where he will be engaging migrant workers from China to produce art, exploring recent art market trends through ethno-osmosis.

Whether in reflection upon the history of institutional critique, art market practices, or critical discourse, MacKinven’s activity has always involved a self-conscious wariness of binary modes of thinking. In a series of work exhibited at Art Basel 2007, he borrowed from the star-rating system often employed in magazine reviews, and painted on each canvas its rank. In an act that seemed to undermine this distanced commentary, he then advised his gallerist to sell the works at prices that reflected their rating. While positioning himself as both critic and accomplice, MacKinven’s work also managed to express a discomfort with the limitation of his choices. Here, MacKinven focuses his attention on the many re-births and deaths of painting that have been discussed over the ages. By allowing the surface of his work to rust, he proposes a kind of painting that exists in a limbo-like state. Rejecting the two fates that have traditionally been forced upon the medium, he conflates conventional understandings of old and new in what he calls an “un-dying entropic timeless living corpse”. All this is achieved, however, without complacency nor the comfort of certainty. MacKinven remains ever aware of our indebtedness to past modes of thought even in our avoidance of them, presenting a humorous yet honestly conflicted image of today’s anxieties.

Born in 1971 in Clatterbridge, UK, Alastair MacKinven currently lives and works in London. Since his studies at Goldsmiths College, he has worked extensively in painting and performance art. Recent solo exhibitions have included a collection of his performances shown at Focal Point Gallery, Southend-on Sea and an investigation into value systems exchanged within the art world in “Nought to Sixty, ET SIC IN INFINITUM AGAIN” at the ICA, London. The artist’s work has also been featured in group exhibitions in a variety of cities, from Houston, Texas, to Vestfossen, Norway.