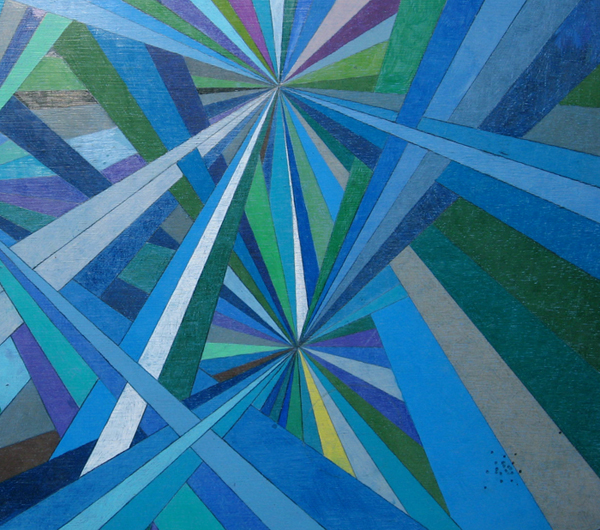 Alicia McCarthy’s vivid works weave together color, pattern and occasional lyrical or understatedly profound phrases. The artist is a core figure of the Mission School, a movement beginning in the early 1990s in the Mission District of San Francisco. Her artworks continue to evolve essential components of the School’s character.

The artist is drawn to the discarded. Digesting the city’s landscape, ambivalent everyday items sheared from their original intent are re-appropriated into intimate art objects. Abandoned wood is scouted, and repurposed as a foundation. McCarthy applies found house paint, colored pencil, liquid graphite and spray paint, transforming recycled materials into paintings with a lively folk and punk aesthetic.

McCarthy lives and works in Oakland, California where she was born in 1969. Most recently, the artist was the recipient of the 2013 Artadia Award, San Francisco. She received her BFA from the San Francisco Art Institute in 1994 and also attended the Skowhegan School of Painting/Sculpture, Skowhegan, ME, and the New York Studio Program, New York, NY. In 2007 she received her MFA from the University of California, Berkeley. McCarthy has exhibited her work in New York, California, and internationally and is the recipient of awards from the Headland Arts Center and New Langton Art in San Francisco, California.

CHAOS TO COUTURE AT THE METROPOLITAN MUSEUM OF ART