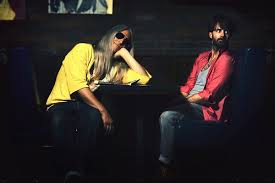 Hailing from LA and London respectively, AM & SHAWN LEE first bonded over their mutual love of vintage French and Italian Soundtrack music and 80’s digital effects. Separately, the two have racked up an impressive number of accomplishments: as a solo artist, AM has earned widespread acclaim for his unique mixture of pop, soul, R&B and psychedelia, and Shawn Lee, best known as instrumentalist groove-master, is also one of hip hop’s most sampled artists. The duo have shared stages with bands such as AIR, Phoenix, Sigur Ros,Charlotte Gainsbourg, Caetano Veloso, and Bonnie “Prince” Billy. After releasing a debut album, Celestial Electric, in 2011 to praise from KEXP, FILTER, Under The Radar,NYLON and more, the duo is back with their first release on Park The Van Records (Dr. Dog, He’s My Brother She’s My Sister, Generationals.) Paying homage to the beginning of the digital era with their own brand of electro-tinged soul, AM & Shawn Lee’s La Musique Numerique will be released on May 7th.

Album opener “Two Times” blends 70’s funk with 80’s Sleng Teng Riddims, complete with an infectious groove that will keep you on your toes. For an early taste of the new album, you can download the “Two Times” MP3 HERE.

Exploring themes of love, addiction, and even economic bitterness, La Musique Numerique is a throwback to the Casio’s heyday while remaining futuristic and inventive. Album track “Automatic” features an irresistible chorus punctuated by a danceable beat, funky filtered bass lines, and an electric sitar intro that will have you immediately hooked. “All The Love” speeds up the pace with a toe-tapping disco beat, catchy vocal melodies, and a chorus that begs you to move. “In The Aftermath” is a sonically rich ballad with swirling layers of vintage synth instrumentation that set an atmospheric tone, showing a softer side of the album.

AM & Shawn Lee blur genre boundaries with a unique sound that fuses the best parts of funk, soul, disco, and electro, uniting the past and the future of music. Stay tuned for more from AM & Shawn Lee, coming soon!

SUPERBILLION RECORDS BRINGS LUCY LOVE & LINKOBAN TO THE US FOR SHOWCASES