It’s fairly common for industry-thrived stars to include several titles towards their already extensive IMDB profile these days. Amanda Peet is no different. New York native, Peet has been polishing her expertise on “The Good Wife” since 2012 and fine-tuning her much anticipated play, “The Commons of Pensacola”. The forty-one-year old actress is no new carbine in the cutthroat film industry. The actress began her debut in 95’ appearing in a ‘Law & Order’ episode, received more limelight in the ‘Jack & Jill’ series later in ’99, and is now debuting her first play. Peet acknowledged her limits as an actress and reached out to Sarah Jessica Parker to play one of the female leads in her dramaturge, quite humbling to say the least.

Sarah Jessica Parker and Blythe Danner are to star in her premier of “The Commons of Pensacola”, showing at the Manhattan Theatre Club. Co-starring Zoe Levin, Ali Marsh, Michael Stahl-David and Nilaja Sun, the show is being directed by MTC’s artistic director Lynne Meadow. Previews begin on October 22nd, 2013 and opening night is set for November 21st. 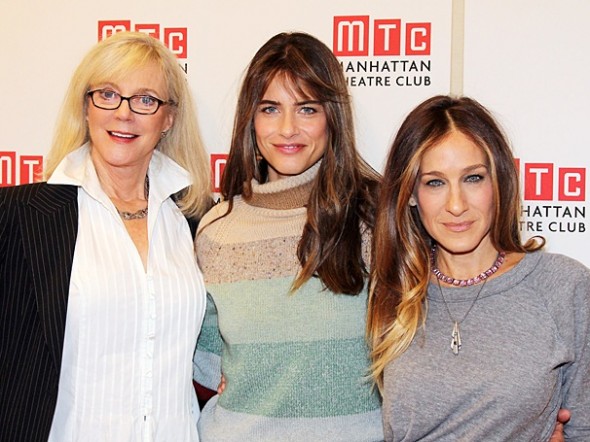 Danner, Peet and Parker at the MTC Press Release

Parker and Danner will once again take the stage together – as they have starred in MTC’s 1995 hit production ‘Sylvia” by A.R. Gurney. The two will face family and fiscal quarrels come fall. A discord between a mother (Danner) and a daughter (Parker), who learn to love each other all over again, in the midst of Danner’s husband being entangled in a Wall Street scam. The charmingly, razor-sharp dialogue of the playwright is not one you should miss with its bits of humor and insight into relationships.

“Judith [played by Danner] has been divested of her assets and forced to leave her luxurious New York life after her husband’s Wall Street scam became headline news. When her daughter Becca [played by Parker] and Becca’s filmmaker boyfriend [played by Stahl-David] pay Judith a visit to the one-bedroom condo Judith now occupies in Pensacola, Fla., everyone’s motives are called into question,” a synopsis said. “How will past and present circumstances inform how this family moves into the future?”

DEVELOPMENT OF A PROMISING FEMALE VIAGRA - CAN OUR SOCIETY HANDLE SUCH A PRODUCT?