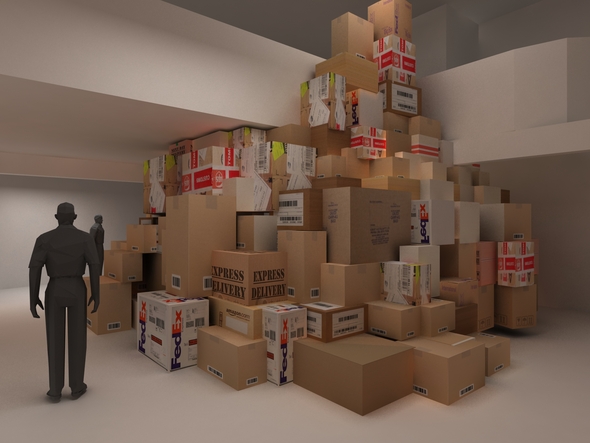 The Breeder presents the exhibition Group Mountain by artist and architect Andreas Angelidakis.

At the core of the exhibition is a monumental work by Andreas Angelidakis that consists of cardboard boxes of art shipping companies. Their accumulation seems to be the result of continuous, obsessive buying. Angelidakis has incorporated within the installation of Group Mountain his video “Domesticated Mountain” (2012) as well as a group exhibition with works on paper which he has curated.

Group Mountain is inspired Habitat 67 a model community and housing complex in Montreal, Canada designed by Israeli–Canadian architect Moshe Safdie. It comprises 354 identical, prefabricated concrete forms that create residences with many communal spaces which integrate the benefits of suburban homes, namely gardens, fresh air, privacy, and multilevelled environments, with the economics and density of a modern urban apartment building. It was believed to illustrate the new lifestyle people would live in increasingly crowded cities around the world but it ended up as another lost utopia of the 60s.

Andreas Angelidakis has developed an artistic voice that switches between the languages of architecture, curating, writing and internet. He often speaks about spaces, buildings and the society that inhabits them, with the exhibition format acting as vehicle for ideas and medium for his artistic practice. His exhibitions challenge the viewer both in terms of their content their format, and the constantly shifting role of the exhibition maker.