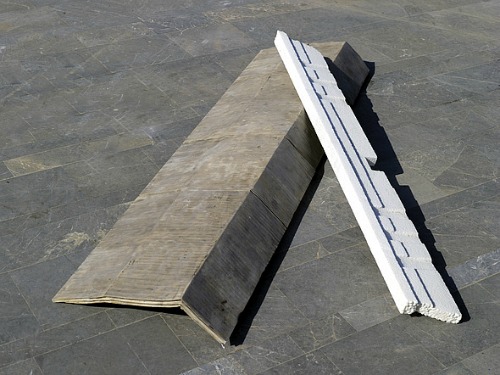 The Breeder Monaco is presenting a solo exhibition by Andreas Lolis. Born in 1970, Lolis is a classically trained sculptor with a predilection for the noblest and most Hellenic material of them all: marble. However, his figures, formed with the splendid stone, are not exactly Apollonian depictions of beauty in the line of lets say a celebrative torso of Phidias or his scholars, but rather its unconditional negation. Lolis intends to show the margin of modern society, the dusty, dirty truth of globalization not its glories. His creations are inanimate objects, ready-made compositions embodying the most tangible excrement of present-day consumerism: litter.

He shows us unadorned waste, thrown away garbage, as one might see lying around on a run-down street corner of a major city. We see worn out cardboard boxes, wrinkled by the elements, marked and yellowed by time. Some of them are flattened as if they were the occasional sleeping place of a homeless person taking shelter for the night. Stripes of puffy polystyrene hover above the cardboard: the disposable shiny white surplus of the throwaway, mail-order society.

But as we take a deeper look, as we physically touch the objects situated in front of us, a cold shudder runs through our spine. Suddenly we get back to our senses, realizing that we have fallen victim to an optical illusion. What seems so remarkably real and warm turns out to be truly cold and false, sculpted ironically from the rock-hard past of antiquity. The cardboard is magisterially shaped out of Moroccan marble, resembling the worn-out colors of decay. The Styrofoam is made out of the classical Dionysus marble, pallid and pure like a post-industrialist trip on neo-classicism.

By ennobling human waste using with great craftsmanship a historically relevant and ideally eternal material, Lolis forces the viewer to confront oneself with the squalor, the evident and daily foulness our society produces but chooses to ignore and finally the ethereal, the vanity of beauty and the peculiar falseness of it all.