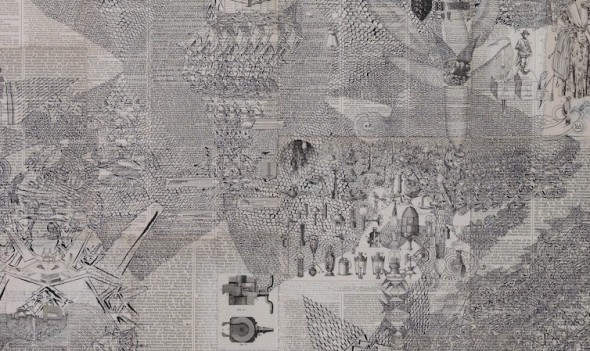 As one of the founding fathers of semiotics Ferdinand de Saussure theorized the association of signifier and signified, that is the correlation of meaning and the means to convey it. On the same line of thought, artists commonly inserted in the movement of visual poetry celebrate the pages of the book by amplifying the written word making it become art in the form of sculpture or painting. Antonis Donef, the Athens based artist born in 1978 and now represented by The Breeder, proceeds in the opposite way.

In an act of rebellion against the ordinary procedure of consuming literature he tears complete pages out of books and glues them onto the canvas creating an indiscriminate layer of sheets that reverse the customary sequence of succession of the pages and paragraphs which consecutively serve as the base of his drawings. Donef’s art divides into three separate phases, each of which is stirred by its peculiar creative necessity. It is as if the fragmentation of the universe of the word – the pages of the book, which he rips apart and presents in a wild new order of coherence – needs to be preceded by the fragmentation of the artist himself.

At first there is Donef the collector, the hunter and gatherer of rare printed matter. He strolls through the second-hand and antique bookstores in Athens in hunt for old encyclopedias, almanacs, illustrated reference books and any other odd manuscript he can lay his hands on. A true bibliophile, he accumulates tomes in an array of languages and from different sources – including his friends – and incorporates them thoroughly in his own private library. At the same time, his beloved books and especially those compilations of a body of information commonly called compendium, represent the static and purely subjective knowledge of a certain time period of human history. The artist disputes the fact that the reader has to resign himself to a work presuming to impart a total truth. Tangled in this bizarre love and hate relationship with the printed word Donef the assembler – the second phase of his creations – emerges. After a careful and often agonizing selection he tears the pages out of the books, rearranges them by his own rules and sticks them onto the canvas. In a constant struggle with himself sometimes he is unable to tear apart a book. At the same time he is deeply excited to destroy a precious antique volume and use it as the foundation of his art. The written pages of presumptuous knowledge – yellowed by time, saturated with history and often rendered indecipherable to the common viewer as written in languages not using the Latin letters such as Greek, Russian or Chinese  – lie flat on the canvas, incoherently arranged side by side giving the viewer a purely pictorial impression. At this point the artist proceeds to the third phase – the completion of the alienation of the word – becoming Donef the miniaturist. With the use of a traditional fountain pen dipped into Indian ink – commonly used in the past to write or print books – he starts by timidly enhancing the pictures and marginalia lingering on the pages, then slowly growing bolder he works his way up to increasingly complex illustrations. An uncompromising worker (some of his paintings take up to 2 years to be concluded), Donef is a pedantic artist, his paintings focus on details and as every detail becomes part of the whole, and only in the end the dots unite and become – like stars in a constellation – meaningful when seen from afar. His depictions are reminiscent of a post-apocalyptic, tattooist Hieronymus Bosch with hundreds of themes, motives, movements, images and figures filling the picture. In-between: the printed symbols of the Chinese description of a steam engine or the differentiation of traditional Rumanian costumes in Cyrillic letters. Similarly to a child’s iconoclastic instinct to destroy or manipulate whatever he is confronted with, Donef makes use of the printed media as a base to his own narrative, which often continues, stretches and alters already given lines and forms. By rendering illegible the page he deprives it of its first and fundamental function. In fact he creates a new one, totally estranged from the accessibility of a potential reader. By deconstructing the traditional meaning of the word, by dispossessing the page from its main function and finally subjugating it to the base of his paintings, Donef elevates the book and its content to pure art, giving it the infinitive meaning each spectator encounters in his own personal epiphany. Only then, in this fourth and final phase, the apotheosis is complete and the written word acquires a new, pictorial meaning.