That…depends. Instagram has released a statement that attempts to clarify their policy on nudity in photos. Previously, they had a more general, “no nudity or genitalia” rule, which left some wondering about the nipple – a female nipple is considered private, or NSFW, but a male nipple is fine. In theory, you could have a picture of just a male nipple taking up the whole frame, and it would be a-okay (but just be sure to label it “male nipple” so the public knows they’re not looking at something offensive. Just recently, Instagram clarified their no-nudity policy: “We know that there are times when people might want to share nude images that are artistic or creative in nature, but for a variety of reasons, we don’t allow nudity on Instagram. This includes photos, videos, and some digitally-created content that show sexual intercourse, genitals, and close-ups of fully-nude buttocks. It also includes some photos of female nipples, but photos of post-mastectomy scarring and women actively breastfeeding are allowed. Nudity in photos of paintings and sculptures is OK, too.”

Further examination of Instagram’s clarified policy reveals it still isn’t very clear at all: “close-ups of fully-nude buttocks” aren’t allowed, so by inference, background buttocks are? The nipple issue has developed a few clauses. Nipples of a female person are not allowed. Post mastectomy scarring is allowed. Nipples with babies attached to them are allowed. This is a slight change in their policy, as previously, Instagram had been known to pull photos of women breastfeeding. Now, after a social backlash, it seems breastfeeding is now okay. The reason for these exceptions are that breast feeding and mastectomies are not, or should not be, things which are sexualized. But are female nipples really that much more sexual than male ones? 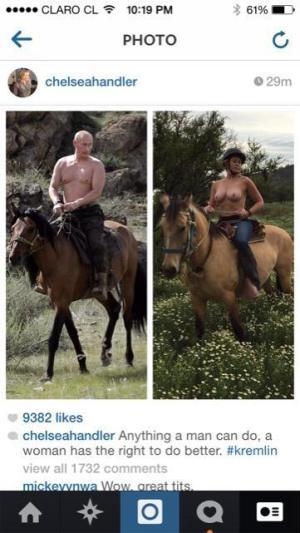 Several celebrities don’t think so. Rihanna posted topless photos from her Lui magazine cover in 2014, resulting in a suspension of her account, and Miley Cyrus has also gotten into Instagram trouble with her bare-chested pics.

Bruce Willis’ daughter, Scout, after getting kicked off of Instagram for posting her own #freethenipple pic, wrote: “Women are regularly kicked off Instagram for posting photos with any portion of the areola exposed, while photos sans nipple – degrading as they might be – remain unchallenged.” Sexual photos are not censored; only photos which are somehow socially taboo.

More recently, Chelsea Handler posted a topless pic of herself in protest over Instagram’s no-female-nipple policy. Hey, if Putin’s pecs are Instagram approved, then Chelsea’s cha-chas should be as well. This is where the clarification of the guidelines breaks down – the reasons for certain photos being considered taboo are still too arbitrary, and mostly based on social norms instead of any moral, ethical, or legal laws.

Instagram has been known to go after photos that don’t clearly break the NSFW rule, like some which don’t contain nudity at all, including a photo from artist and poet Rupi Kaur which showed a spot of period blood on her pants and her bed. The censorship Instagram imposes is more of a socially-acceptable censorship, taking away anything that is considered socially taboo. But this only enforces current social norms, which sometimes need to be challenged. After all, that’s why we have free speech in America – so that even unpopular topics can be discussed and brought out into the open where they can challenge and sharpen existing notions of how the world works or should work.