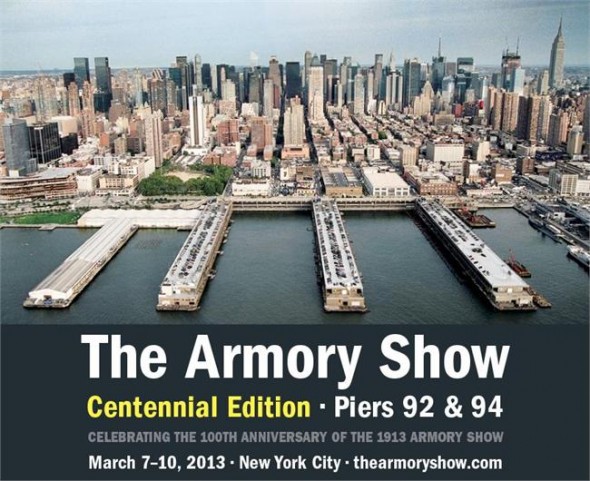 New York City’s largest annual art fair kicks off this Wednesday in Piers 92 and 94 along the Hudson River in its centennial year, triggering a week of gallery tours, forums and satellite fairs all around the city.

“Canonical names from Picasso to Pollock have all been presented at the fair, as have, in equal measure, some of the most cutting edge artists of a younger generation. Organized by The Armory Show, Armory Arts Week has emerged as one of liveliest moments in New York’s already rich cultural calendar, with a number of smaller art fairs temporarily alighting throughout the city and the major museums staging their marquee exhibitions to coincide with the fair.”

The two pier warehouses will be home to vast visual and interactive collections of modern and contemporary art. Visit the Armory Show website for a complete list of exhibitors.

Since 2009, the show, known to attract tens of thousands of artists and art enthusiasts from all over the world, has birthed a city-wide series of events, with several of the city’s biggest museums and galleries participating. Armory Arts Week begins Monday. Each day showcases events in certain areas of the city, from Uptown/Museum Mile on Tuesday to Chelsea/Brooklyn on Saturday, with galleries presenting all week long.

Also happening this week is VOLTA NY in Soho, an invitational show of emerging solo artists’ projects and the American incarnation of the successful young fair founded in Basel in 2005, and the SCOPE NY Contemporary Art Fair. There will be free shuttle buses running between SCOPE and the Armory Show every day. Renowned for presenting the most innovative galleries, artists and curators, SCOPE Art Shows in Miami, Basel, New York, London and the Hamptons have garnered extensive critical acclaim for over a decade.

The Armory Show brings with it a litany of cultural partners, among them the Metropolitan Museum of Art, the Guggenheim, the New Museum, the Asia Society and the Whitney Museum.