Days after the opening, Art Newspaper was already trumpeting the success of this year’s installment of the Armory Show, and rightly so; Armory 2010 positively bustled with cheery energy. As I reported a year ago, Armory 2009 was a dreary affair, peopled by bored galleristas with forced smiles. After enduring the last two years of gallery death watches, it seems that the art world is ready for some cautious optimism.  However, after visiting Armory, and two of the satellite fairs—Pulse and Volta—I found that many of the most engaging works on display continued to mine the uncertainty of recent times by retreating into art historicism and gothic theatricality. 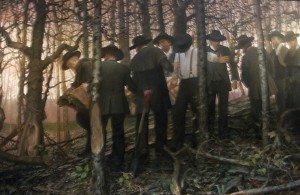 The first work I encountered at Armory, Vincent Desiderio’s Mourning and Fecundity (2007) at Marlborough Gallery, was located just inside the entrance to the Armory Modern section. It simultaneously brought to mind Dutch Baroque corporation paintings, such as Rembrandt’s Night Watch, and sweeping Romantic canvases.  The massive, history-painting-style proportions of the work, the apparently period clothing of the figures and the use of diffuse natural light give Mourning and Fecundity an academic heft.  Nevertheless, what continued to hold my attention was the mystery at the center of the work—what are the men carrying and why? 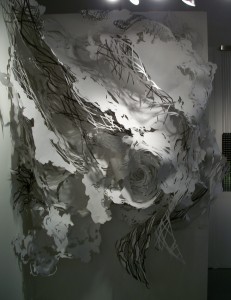 Pulse NYC, a smaller, scruffier fair, bills itself as “the leading US art fair dedicated solely to contemporary art.”  Yet, I found little to interest me there.  Mira Pearlman’s moody, paper maelstroms at Caren Golden Fine Art and Aleksandar Duravcevic shadowy, graphite drawings at Galerie Stefan Röpke were two of the few bright spots.  Pearlman’s menacing, papery swirl, Subito, drew me to Goldman’s booth from across the fair and continued to engage me, even very close up.  The flimsiness of the paper is a potent metaphor for the ephemerality of weather.  Duravcevic’s graphite on black paper works, Mirror and Candle, are the most successful of the several black on black works I saw at this weekend’s fairs.  Mirror, in particular, delighted me because not only is Duravcevic clearly having fun with the haunted-house drama of the black on black schema, but the work is also technically masterful. 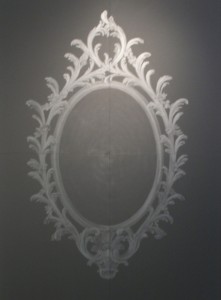 Of the three fairs I visited, Volta NY was by far the most enjoyable for two important reasons: one, the participating galleries represented a diverse selection of artists, and two, each gallery only exhibited the work of one artist.  This allowed visitors to truly delve into the work of artists that interested them.  If you have time for only one art fair next year, make it Volta.  I was ready to dismiss Yuval Pudik’s photocollage-esque drawings (on view at Kim Light/Lightbox) as an empty redeux of Victorian imagery, but the more I looked at his work, the more impressed I became with its cohesiveness.  His collages are three-car-pile-ups of human, animal and vegetal parts, clothed in bits of historicist finery and glam-rock bondage.  His works are trendy in their post-modern appropriation, but they also accomplish a rare feat in contemporary art—they are truly subversive. 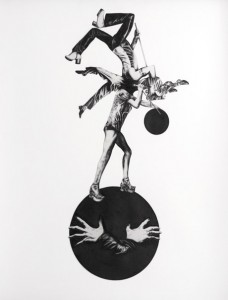