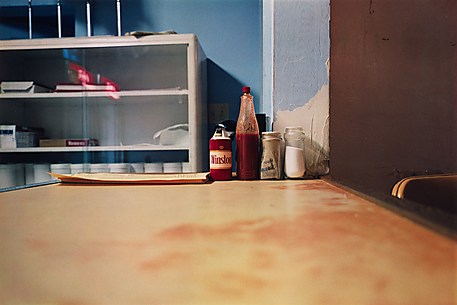 At War with the Obvious: Photographs by William Eggleston

The American photographer William Eggleston (born 1939) emerged in the early 1960s as a pioneer of modern color photography. Now, 50 years later, he is arguably its greatest exemplar. At War with the Obvious: Photographs by William Eggleston at The Metropolitan Museum of Art presents the work of this idiosyncratic artist, whose influences are drawn from disparate if surprisingly complementary sources—from Walker Evans and Henri Cartier-Bresson in photography to Bach and late Baroque music. Many of Eggleston’s most recognized photographs are lush studies of the social and physical landscape found in the Mississippi delta region that is his home. From this base, the artist explores the awesome and, at times, the raw visual poetics of the American vernacular.

The exhibition celebrates the fall 2012 acquisition of 36 dye transfer prints by Eggleston that dramatically expanded the Metropolitan Museum’s collection of this major American artist’s work. It added the entire suite of Eggleston’s remarkable first portfolio of color photographs, 14 Pictures (1974), 15 superb prints from his landmark book, William Eggleston’s Guide (1976), and seven other key photographs that span his career.

The exhibition is made possible in part by Renée Belfer.

Eggleston wrote that he was “at war with the obvious,” a statement well-represented in works such as Untitled [Peaches!] (1970)—a roadside snapshot of rocks and half-eaten fruit thrown atop a sunlit corrugated tin roof capped with a sign announcing “PEACHES!” The exhibition features a number of the artist’s signature images, including Untitled [Greenwood, Mississippi] (1980), a study that takes full advantage of the chromatic intensity of the dye-transfer color process that, until Eggleston appropriated it in the 1960s, had been used primarily by commercial photographers for advertising product photography; and Untitled [Memphis] (1970), an iconic study of a child’s tricycle seen from below. It was the cover image of the artist’s seminal book William Eggleston’s Guide, which accompanied his landmark show at the Museum of Modern Art in 1976.

As much as Eggleston was influenced by various sources, he, too, has proved influential. His inventive photographs of commonplace subjects now endure as touchstones for generations of artists, musicians, and filmmakers from Nan Goldin to David Byrne, the Coen brothers, and David Lynch.

At War with the Obvious: Photographs by William Eggleston is organized by Jeff Rosenheim, Curator in Charge in the Department of Photographs at The Metropolitan Museum of Art.