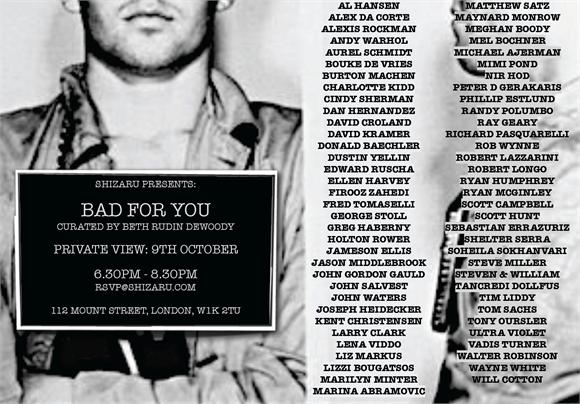 BAD FOR YOU: CURATED BY BETH RUDIN DEWOODY

As the international community flocks to London for Frieze, Shizaru presents BAD FOR YOU, an exhibition curated by Beth Rudin DeWoody featuring sixty-seven contemporary and established artists primarily from America.

Taking inspiration from its eponymous title, BAD FOR YOU highlights the unwavering relationship between art and vice, displaying the human relationship with what is ʻbadʼ through issues like self destruction, drugs, alcoholism, gambling, materialism, vanity, and cigarettes. A title that is at once humorous and grim the exhibition avoids judgment, allowing the viewer to draw their own conclusions.

Artists explore these many themes through various moralistic viewpoints. Some works celebrate, disregard and revel in what is seen as being ʻBadʼ whilst others raise alarm and aim to forewarn the consequence of a life of decadence. Artists celebrate the excitement of experimentation, and the pleasure that comes with doing what is ʻBad for Youʼ such as Fred Tomaselli, who revels in his chosen vice; drugs, by making decorative patterns out of marijuana leaves and Liz Markus, whose humorously titled “Fuck it” evokes the carefree attitude of “doing it anyway.” These words written on raw canvas next to a whiskey bottle depicts that vertiginous moment, when one decides to carelessly down the rest of the bottle.

Many works explore human desire and the thrills that tempt us to rebel. The glitzy plethora of fortune is presented by Tony Oursler in his video installation “Bedazzled, Set for Life, Funky $5, Mother’s Day, Welcome to Vegas” which captures a stack of various gambling scratch-off cards, alluding to the temptations that can lure one into a rip of false promise.

Some works aim to expose the fate and repercussions of living a life without restraint. Marilyn Minterʼs “Ball Spitter”, for example, makes a cynical comment on fashion and suggests a grotesque vanity that comes with the fashion world and Cindy Shermanʼs work, “Untitled”, is equally moralistic as she presents pregnancy as a vulgar consequence of sex. The photographs from Larry Clarkʼs seminal Tulsa series are equally alarming, with images of seemingly wholesome midwestern teenagers shooting heroin and playing with guns, displaying in stark black and white the perpetual need for destructive indulgence.

BAD FOR YOU, exposes the lurid, gritty, fearful, dangerous, addictive and destructive and reminds us of the terrible things we as humans are capable of doing to ourselves and/or to each other.

Alongside the exhibition, Shizaru Gallery will host BAD FOR ME, a special pop-up store from New Yorkʼs newest concept gallery GREY AREA. Co-founder and Creative Director, Kyle DeWoody describes her inspiration for the store; ʻIn response to BAD FOR YOU, we decided to create a shop of consumable art objects titled BAD FOR ME. Following the theme of the vice made nice, all the pieces tackle a different instrument of iniquity making them seductive, amusing or even wearable. Pills, guns, blood, and cigarettes; you name it we have it.ʼ

Along with the show is a BAD FOR YOU catalogue representing the exhibition, featuring an essay written by Mike Solomon and cover artwork by Nir Hod.

Beth Rudin DeWoody is a New York art collector and curator. She is the executive vice president of RudiN Management and on the board of the Whitney Museum of American Art, Brooklyn Academy of Music, Creative Time, The New School, New Yorkers For Children, and the New York Police Foundation.

Her exhibitions include Inspired at Steven Kasher Gallery, New York, I Won’t Grow Up at Cheim & Read, New York, Just What Are They Saying… at the Jonathan Ferrara Gallery, New Orleans, In Stitches at Leila Heller Gallery, New York, Think Pink at Gavlak Gallery, Palm Beach, and January White Sale at Loretta Howard Gallery, New York. She is known for being one of New York’s most dedicated patrons, often acting as an early champion of America’s great artists.

GREY AREA is a project that explores the undefined space between art and object. With an online store (shopgreyarea.com) and a retail/gallery/project space in New Yorkʼs SoHo, GREY AREA brings together art made functional and the functional made into art in accessible environments. Since its inception, GREY AREA has put together pop-up shops in various locations, using each environment to explore new themes and present experiential art along side the physical work.

DKNY AND ENRIQUE BADULESCU AT THE HOLE GALLERY

0
The Untitled Magazine October 5, 2012
No Comments Yet