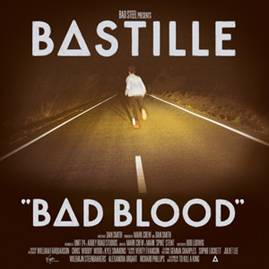 Bastille are one of 2013’s most exciting live bands. Having toured extensively over the last year the band have built up a dedicated and loyal fanbase that connect with Dan Smith’s dark lyrics and huge melodies. The band’s new single Pompeii’ is getting support across the board at radio and is A -listed at Radio 1, XFM, Q, and NME where it is number 1 on the NME radio chart.

Having just supported Two Door Cinema Club on their UK tour Bastille play their own third sold out headline tour in March including two sold out shows at Shepherds Bush Empire followed by dates at SXSW. In May the band headline the Great Escape Festival and will feature at most of the summer festivals including another headline slot at Blissfields in July.

Over the last month the band have scored four number one’s on Hype Machine. Their cover of TLC’s ‘No Scrubs’ entitled ‘No Angels’ reached the top spot on two separate occasions and features on the band’s mixtapes.

Borrowing from hip hop, the band released the two mixtapes online last year combing cover versions of tracks by  Lana Del Rey, Frank Ocean, Rose Royce (amongst others) with film soundtracks and their own songs.

Bastille’s debut album, Bad Blood is out on March 4th. Recorded in a tiny room on limited equipment and co-produced with ‘fifth member’ March Crew, the intention was to “off-set epic sounding instrumentation with lyrics that combine intimate stories or conversations,” says Smith.


Opening track and lead single “Pompeii” is one such epic in miniature, a tale of two lovers, frozen in time, caught in the ash that engulfed the Roman city of sin, “It’s a moment of reflection and introspection, but they’re trapped in time so it’s a moment that’ll go on for an eternity”.

The aim of the resulting Bastille album proper, says Smith, was to “approach each song differently. I wanted each to be its own story with its own atmosphere which brings in different sounds and elements of production, incorporating aspects of the different genres and styles that I love; Hip hop, indie, pop and folk. Film soundtracks can be broad and varied but tied together by the film itself – and I hope the album will be something like that, but held together by my voice and my songwriting, each song a scene or part of a bigger picture.”