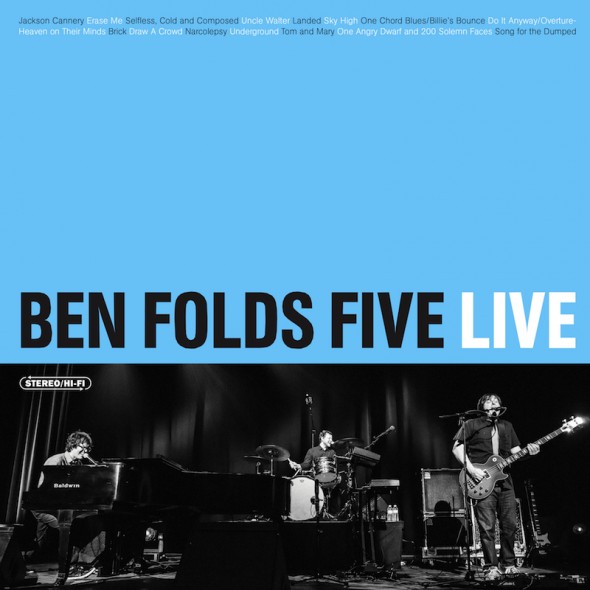 Groundbreaking pop trio, Ben Folds Five, have confirmed the release of their first-ever live album Ben Folds Five Live, on June 4. Recorded in 2012-2013 on their first tour in more than a decade, this new set – available on CD as well as double vinyl – is comprised of high-energy live versions of some of the band’s most beloved classics. Soon after the release of the album, Ben Folds Five, along with Barenaked Ladies and Guster will embark on the “Last Summer on Earth 2013” tour. Complete dates are below.

Ben Folds Five Live was recorded while the band was out touring in support of their latest record, The Sound Of The Life Of The Mind. It was released in September and debuted in the top 10 of the Billboard Top 200, making it the highest debut of their career. It is the band’s fourth record and first in 13 years.

The track-listing for Ben Folds Five Live is below:

The media reaction to The Sound Of The Life Of The Mind was fantastic. Spin claimed, “Folds sounds invigorated to have a rock band behind him again…there is a weight and a whomp to the songs.” The Onion AV Club hailed “Mindsounds exactly what a mature Ben Folds Five record should sound like: hard-won wisdom and withering observations with an unabashedly sentimental core,” and American Songwriter said the new record brings out “the muscle and mischief of Folds’ best music…it’s perfect, quintessential Ben Folds Five.” NPR has weighed in on the new record a number of times, including a feature on All Things Considered, an appearance on Wait Wait…Don’t Tell Me!, a performance on World Café and a live interview on On Point.

Ben Folds Five (Ben Folds – piano, Darren Jessee – drums, Robert Sledge – bass) were among the most distinctive and inventive bands of the alternative era, beloved for their kinetic live shows and piano-powered popcraft. The Sound Of The Life Of The Mind made it plain that the years apart have only served to amplify the band’s already estimable gifts.

2012’s “Last Summer on Earth Tour” was met with huge praise. Rolling Stone called it “one of the 10 hottest summer package tours of 2012,” and Entertainment Weekly spotlighted it on their “2012 Summer Must List.” Back by popular demand, this year’s tour is set to kick off June 17th at the Verizon Theatre in Dallas, TX. Ben Folds Five will perform at 28 arenas and amphitheaters across the country as part of the 2013 “Last Summer On Earth” tour. Tickets can be purchased via Ticketmaster.com and Livenation.com

Complete “Last Summer on Earth 2013” tour itinerary is below:

July 13 – Nashville, TN  via The Woods at Fontanel

July 21 – Bangor, ME  via Waterfront Park

JILLETTE JOHNSON SET TO RELEASE HER DEBUT ALBUM, WATER IN A WHALE