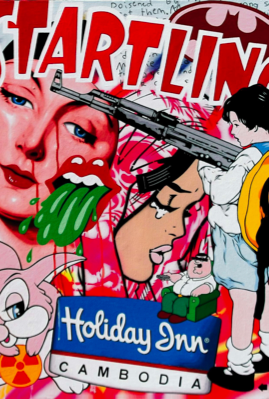 Shooting Gallery presents Australian artist Ben Frost’s solo show “See Inside Box for Details,” opening Saturday, September 8th, from 7-11 pm. The exhibition will feature approximately 12 paintings on canvas as well as paintings on found packaging, such as pharmaceutical boxes, candy and cereal packaging. The exhibition is free and will be open to the public for viewing through September 29th, 2012.

The controversial painter and street artist will be showcasing a unique body of work, critiquing our media-obsessed society and our loss of innocence through advertising. Ben’s work subverts logos, icons and characters from popular culture and re-presents them in startling and often confronting new ways.

“See Inside Box for Details,” aims to re-evaluate our understanding of product advertising by juxtaposing unlikely and confronting elements into some of our most loved and well known consumer icons. Ben Frost confronts the conjoined twins of capitalism and consumerism with striking compositions that present a chaotic look at a seedy nature underlining pop culture, presenting sex and violence in a glamorous role. Most unnerving of all is that that on first glance the work of Ben Frost may seem innocuous, filled with the bright palette and playful characters of childhood cartoons and sugary cereals. Whether it takes the form of medicine to keep sickness at bay or highly–processed treats to keep you content in front of the television, our pre-packaged lifestyles are sold to us in colorful and dynamic boxes. With a series of paintings placed on found pharmaceutical and food packaging, Frost highlights the disingenuous optimism of advertising. The innocence of familiar cartoon forms overlain on stark boxes of prescriptions pills like Morphine and Botox opens a discourse on the proliferation of prescriptions in modern culture and the morally-ambiguous stake pharmacology has in society’s welfare.

From the Artist: I’ve been using the logos and design elements of product packaging for many years, and it seemed a natural evolution to begin painting directly onto the packaging – to introduce subversive elements within what already exists as an object.

Double entendre and satirical word play is brought out in new readings of our favorite and well known products i.e. the breakfast cereal Special K features a drug dazed rabbit introduced to the packaging, Viagra and Cialis boxes juxtaposed with Mr. Burns, Pop Tarts featuring Britney Spears and Whitney Houston and a series of confronting paintings onto McDonalds fries boxes. Since I began painting onto packages in 2011, the branding and product titles seem to be more obvious in their possible double meanings. Twinkies, Hamburger Helper, Vanilla Cupcakes, Dirty Rice, Cheese Nips and Hot Tamales have all suggested new and twisted re-imaginings.

I source the objects from different sources, either directly off the shelves of supermarkets, friends who are in the medical industry, trash cans and from people who actually use the various medicines that are inside the boxes.

Australian born artist Ben Frost is known for his kaleidoscopic Pop Art, mash-up paintings that take inspiration from areas as diverse as graffiti, collage, photorealism and sign-writing. By subverting mainstream iconography from the worlds of advertising, entertainment and politics, he creates a visual framework that is bold, confronting and often controversial. With a blatant disrespect for the signifiers of our visual culture, Ben creates multi-layered surfaces of refreshing intensity.

He has been exhibiting throughout the world for the last 12 years and has been involved in his own share of controversy. In 2000, he faked his own death for an exhibition suitably titled ‘Ben Frost is Dead’ which made national news in Australia. His painting ‘White Children Playing’ caused a stir for its graphic depiction of children using drugs and a masked and disgruntled assailant slashed one of the paintings in his exhibition at the Institute of Modern Art in Brisbane. Police also tried to remove one of his collaborative artworks in an exhibition at the Museum of Contemporary Art in Sydney because of its graphic nature. He also began and continues to run the Australian street art website ‘Stupid Krap’ and started the yearly paste-up festival Paste-Modernism, which is the largest of its kind in the world.

The Shooting Gallery opened its doors in 2003 to the historic Tenderloin district of San Francisco; known for its lively street culture. Growing up in Southern California gave owner and curator, Justin Giarla, a love for everything lowbrow: pop art, street art, outsider art, punk rock album art, comic book art, surf/skate art and hot rod culture. Giarla recognizes how important it is to provide lowbrow artists with a platform for their work, which is exactly what Shooting Gallery has done for nearly a decade.