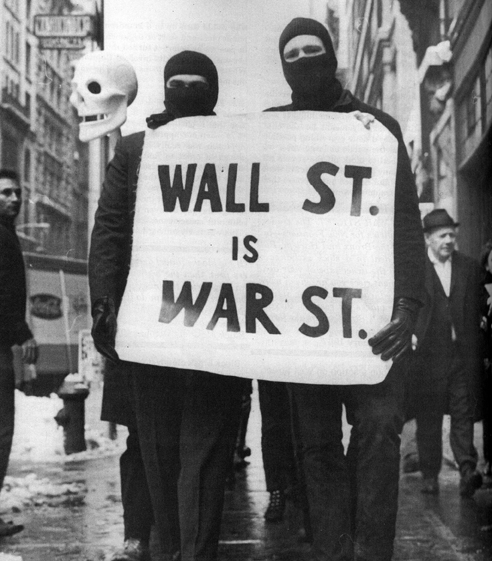 Artist Ben Morea is largely known as the driving force behind 1960s revolutionary art in New York City. In 1968, Morea formed Up Against The Wall Motherf*ckers, a group of self-proclaimed ‘outcasts’. The group was deemed “the middle-class nightmare” – disrupting art galleries, speaking against war, all with the intentions of starting a revolution. Some may say that Morea and The Motherf*ckers were the first “Occupy” group as they were involved in just about every movement in New York City – always preaching peaceful protest.

The Boo-Hooray gallery has put together the first exhibition dedicated to the artist’s work in the underground press, performance art, and radical politics.

The opening of  “Black Mask” took place at the Boo-Hooray Gallery this past Thursday and the man of the hour was artist Ben Morea. The soft-spoken 70-something year old is nothing short of a walking piece of American history. From his work as an underground anarchist in New York City during the 1960’s, to having played a large part in cutting the fence at Woodstock in order to let patrons in for free, Morea has quite the back-story.

After waiting for a revolution for a number of years in the 1960’s, Up Against The Wall, Motherf*ckers realized that it just wasn’t going to happen – that’s when Ben Morea seemingly disappeared. For over thirty years, Morea has been living away from New York City – a place where he was once a figurehead for revolutionaries – making Colorado his home. It’s been close to forty years since Morea published underground newspapers, staged protests, and voiced his distaste for Andy Warhol and now he’s come back to New York City to accept the honor of a stunning exhibit set up by the Boo-Hooray Gallery. We strongly recommend taking a trip downtown to learn about the living legend that is Ben Morea.