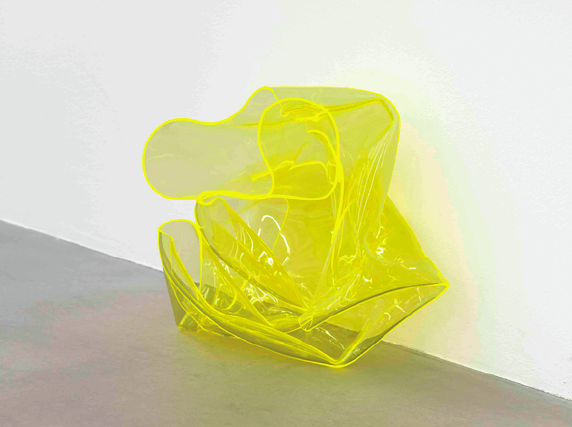 James Fuentes is pleased to announce its forthcoming exhibition by Berlin based artist Berta Fischer (Born
Dusseldorf, 1973) this marks the artists debut in the United States.
Having used Plexiglas as a primary material for over a decade, Fischer’s sculptural work stands testimony
to a sublime post-industrial dialectic. Assembled and cut permutations of otherworldly material create
oscillating effects and dynamic refractions. Panels have been put through a furnace allowing the artist to fold
and form her sculptures in a process akin to origami. These compositions, however, are defined in a matter
of minutes while the plastic cools into shape. The inherent transparency of the material allows for an almost
absolute reduction of form as well as an illusory absence of mass.
In line with the Abstraction-Création movement, in particular the works of Georges Vantongerloo and Naum
Gabo, Fischer’s work, while a continuation of such history, encapsulates and marries the history of
abstraction to a unique and unlikely industrialized partner.
Fischer has recently presented solo exhibitions at Galerie Giti Nourbakhsch, Berlin (2011); Galerie Karin
Guenther, Hamburg (2008); and Krobath Wimmer, Vienna (2007). Group exhibitions include the Prague
Biennial, Prague (2007); Migros Museum, Zurich (2008); Bonner Kunstverein, Bonn (2007); and Museum für
Neue Kunst ZKM, Karlsruhe (2005). This will be the artist’s first solo exhibition in New York.