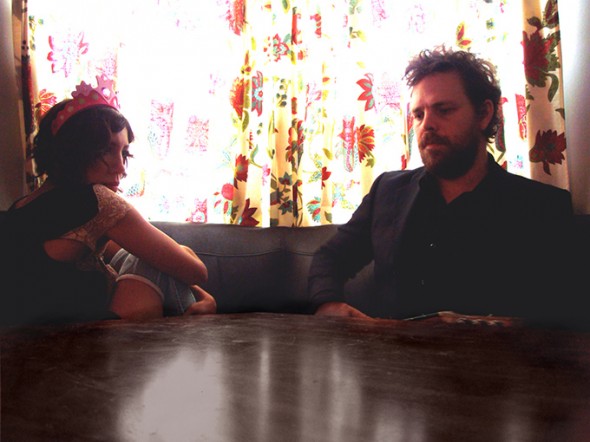 BIG HARP is husband-and-wife duo of Chris Senseney and Stefanie Drootin-Senseney. The band’s sophomore album Chain Letters was mixed by Mike Mogis (Bright Eyes, M Ward, First Aid Kit). Built on a foundation of crackling fuzz bass and angular electric guitars and keyboards, the songs on Chain Letters play like a series of character sketches with characters caught between escape and surrender, or poised at that edge where the two become indistinguishable. While currently based in Los Angeles, the pair have long connections to Omaha. Drootin, a member of The Good Life, has toured and recorded with Bright Eyes, She & Him, and Azure Ray. It was actually on a tour with The Good Life that she was swept off her feet by the handsome guitarist in the opening band, Art in Manila. 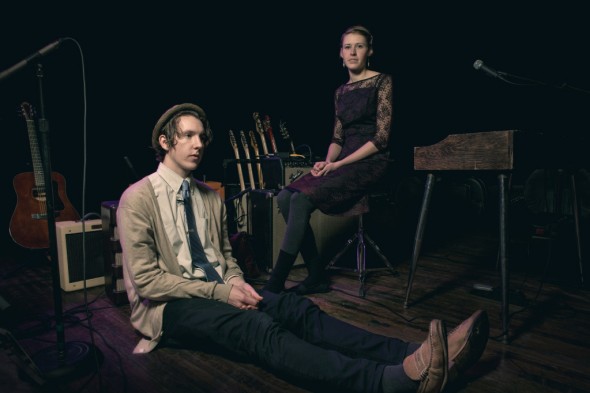 BLESSED FEATHERS‘ debut EP, Peaceful Beasts In An Ocean of Weeds is out now. The West Bend, WI folk duo Blessed Feathers (Donivan Berube and Jacquelyn Beaupré) caught the ear of New York producer Kevin McMahon (The Walkmen, Real Estate, Titus Andronicus), who recorded the band’s EP. The pair contributed numerous instruments to the album, including banjo, flute, vibraphone and various percussion. But, ultimately, McMahon and the band focused on maintaining the earthy, homespun sound that Blessed Feathers has cultivated over the past few years. The EP also features Thor Harris of Swans & Shearwater, who collaborated with Blessed Feathers on their debut release. 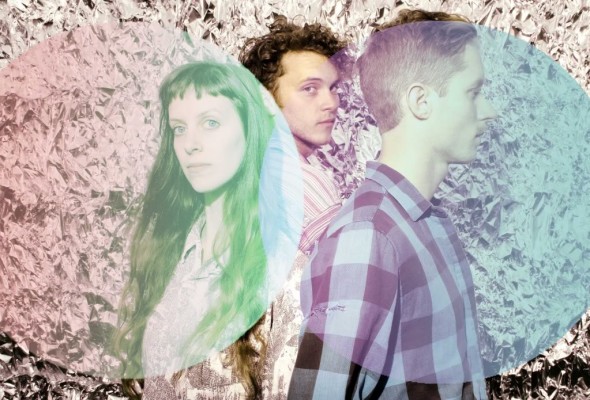 BRAINSTORM (all caps all the time) is currently on tour in support of their new record Heat Waves out now on Tender Loving Empire and will follow up the album with a new single out later this month. Produced by the legendary Robby Moncrieff (Dirty Projectors, Youth Lagoon, Ganglians), Heat Waves shines with inescapable pop melodies, polyrhythmic singing, thunderous drumming, and shimmering guitar lines. With influences ranging from ecstatic African-highlife, to soulful AM-radio nostalgia, the result is a unique brand of art-pop that is energetic, eclectic, and undeniably engaging. 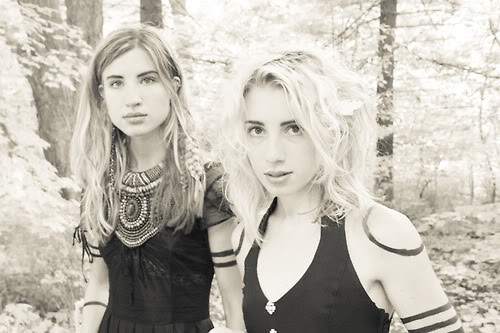 CHAOS CHAOS is Asy and Chloe formerly of the band Smoosh. Smoosh’s debut She Like Electric was released in 2004 when Asy was 12 years old and Chloe was only 10. Over the years the band toured with Pearl Jam, Death Cab for Cutie, Sleater-Kinney, Mates of State, Jimmy Eat World, Cat Power, and Sufjan Stevens, amongst others. The two recorded the songs on their new EP S with Nathan Rosenberg at The Doghouse Studios in Brooklyn, NY except for “Winner” which was recorded with Matt Tong of Bloc Party. There are dance, blues and electronic elements on the EP and the songs blend electronic instruments with acoustic piano, drums, a trash drum kit, saxophone, and experimental vocals. Asy says, “I think we had the most fun we ever had in a studio making this EP because we had never approached music this way before. It will also be very exciting to bring this EP to a live setting (which will involve the Toys R Us Big Piano, a trash drum kit and vocal processors)”. 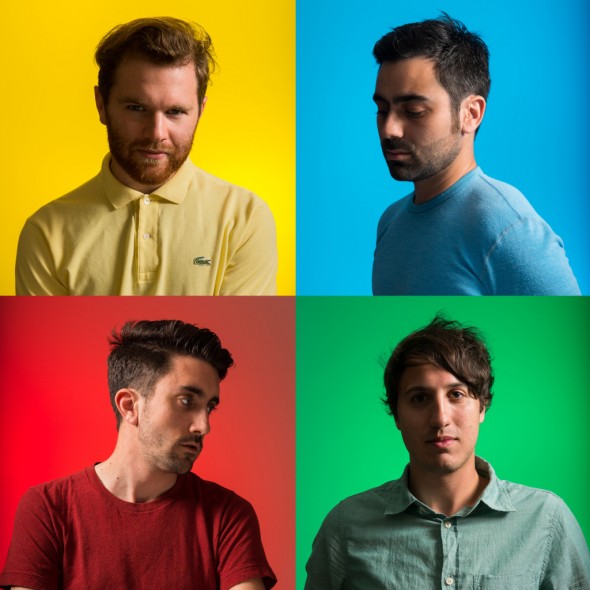 HANDS‘ debut full-length Synesthesia is due April 30 on Kill Rock Stars. A relative newcomer to the LA scene, Hands began as a two-piece from Philadelphia before Halliday and Sweeney headed west and added the low and thump of Hess and Staniloff. The band made a mark on the scene immediately, quickly playing packed shows across the country including stops at SXSW, CMJ and Deluna Fest, headlining Echo Park Rising, sessions with Daytrotter, and a west coast jaunt with Maps and Atlases. Hands’ ability to win over fans with their feverish live show and dance-party-ready sound has already earned them opening spots for the likes of Deerhoof, DeVotchKa, Foster the People and Kimbra as well as playing shows to sold out crowds at venues across LA. Hands’ graceful and danceable indie rock is still under the radar, as evidenced by their spot in  TIME Magazine’s 11 Bands You Don’t Know (But Should) List, but they are quickly rising to the surface, bringing their melodies and thumping beats with them. 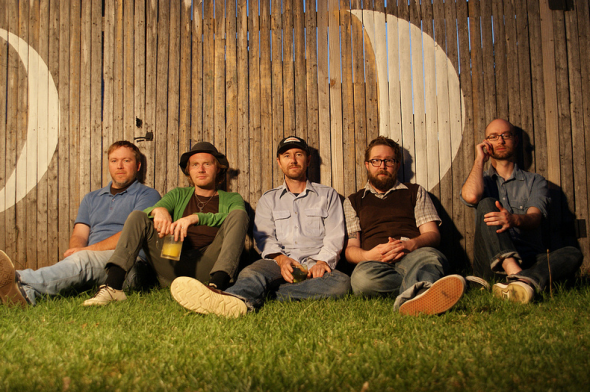 JAKE BELLOWS is the frontman of Neva Dinova, and properly released three full-length albums along with a split with Bright Eyes. Recently, Jake Bellows and friends including Ben Brodin (touring multi-instrumentalist with Conor Oberst), Ryan Fox (The Good Life), Todd Fink (The Faint) and Heath Koontz (Neva Dinova) have been at work on a new album, to be released later in 2013. In the meantime, they took one of those album tracks, “Help”, and put it on a cassette tape with a couple other recordings from recent studio sessions (“She’s Feeling Low” & “It’s All Working Out”), a gorgeous new song called “Meaning Wrong” and an old 4-track cassette solo demo of the Neva Dinova staple “Supercomputer.” 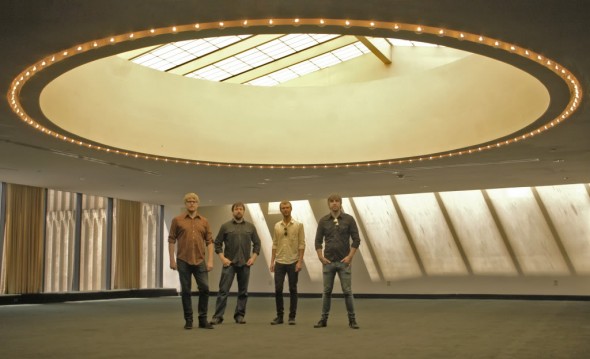 MASERATI – Maserati VII is out now on Temporary Residence. The album was recorded by Kevin Ratterman (My Morning Jacket, Young Widows) at The Funeral Home in Louisville, KY, and mixed by Steve Moore (Zombi, Lovelock) in New York. Maserati VII marks the band’s first release with new drummer MIke Albanese who replaced Jerry Fuchs after his untimely passing. That spirit shines bright on in Maserati VII, their first album conceived since Fuchs’ passing. Maserati has an uncanny ability to toggle time back and forth between the past, present, and future – often in the span of one song.On Maserati VII, they’re grounded and driven by new drummer Mike Albanese (Cinemechanica), whose dexterity and stamina prove a perfect fit for Maserati’s trademark relentless, driving rhythms and epic song lengths, anchored by bass badass, Chris “Coach” McNeal. 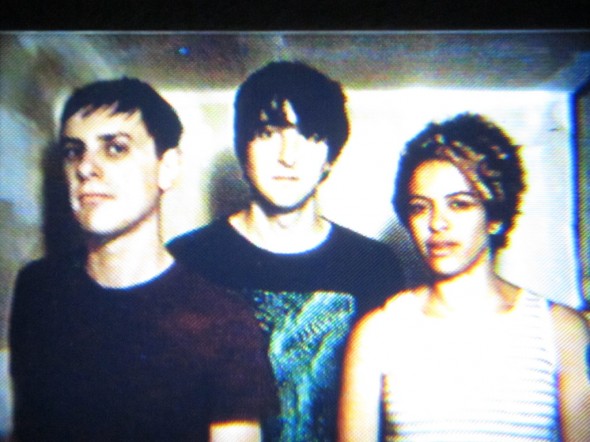 THE THERMALS‘ sixth LP and debut for Saddle Creek, Desperate Ground will be released on April 16. The album was produced by John Agnello (Dinosaur Jr, Sonic Youth) in Hoboken, NJ. Agnello and The Thermals completed the record and evacuated the studio just hours before Hurricane Sandy ravaged New Jersey, a fate quite fitting when you consider the product. Desperate Ground is a true scrappy and scratchy return-to-form for The Thermals, with all the raw power and unhinged adolescent energy that made their early LP’s so insanely enjoyable. Lyrically, Desperate Ground is a brash and irresponsible ode to human violence, a black celebration of the inevitability of war and death. A dark and yet joyous affair, Desperate Ground tells the (murky) tale of a lone rogue in the night. One man, one path, one sword. An unceasing urge to destroy. A never-ending battle against the forces of nature. A destiny impossible to avoid.