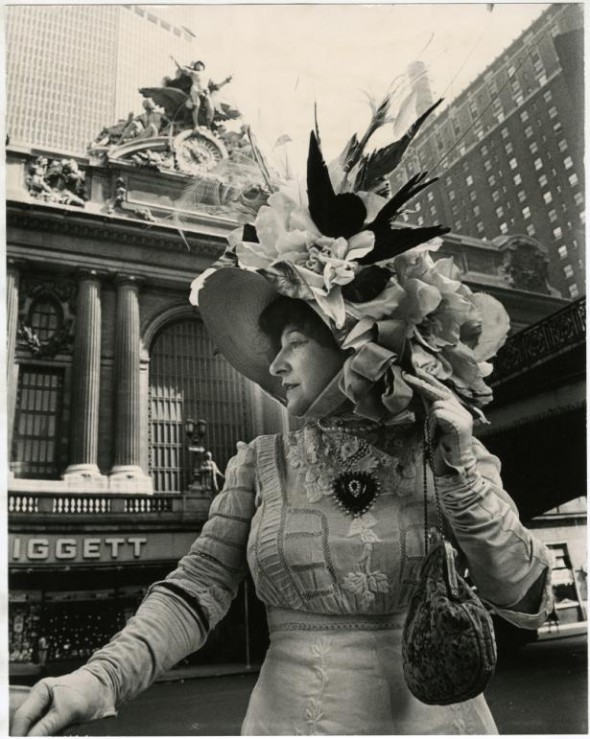 Hardly a day goes by that New York Times “On-The-Street” photographer Bill Cunningham isn’t out on his bicycle, cruising the streets, snapping photos of pedestrians’ outfits on his Nikon to print in his weekly trend roundup in the Style section of the Sunday paper. In many ways, he’s more than a fashion photographer. Despite the humble adornments of his own – a blue windbreaker and khakis – many accredit him as the inventor of street style. He himself is notoriously a function-over-form type of man yet has risen to celebrity status for his influence in dictating the reverse.

Beginning in March, the New York Historical Society will exhibit one of Cunningham’s early bodies of street-style work, Bill Cunningham: Façades. Cunningham spent 1968-1976 working on this personal project, a testament to his connoisseurship of two distinct histories: that of New York and that of fashion. During those eight years, Cunningham captured 200 shots of his colleague and muse, Editta Sherman, modeling period-piece outfits in iconic locations around New York, creating one of his most artistically and historically significant bodies of work from any fashion photographer.

Sherman and Cunningham ran in the same bohemian group of artists who lived in studio apartments in Carnegie Hall (until the Hall began to evict them in 2007, as chronicled in the documentary, Bill Cunningham New York). Extraordinarily eccentric and emotive, Sherman personified the quintessential model for this endeavor. Cunningham scouted costumes from thrift stores, auction houses and street fairs, finding pieces that dated back to 1770. Sherman posed in them in front of architecturally important locations that define the city: Rockefeller Center, St. Paul’s Chapel, Beaux-Arts mansions, the Temple of Dandur. In one of the poignant images, Sherman stands in front of Grand Central Station, gaze fixed away, in an elaborate hat that pays tribute to Cunningham’s former career as a milliner. This image looks straight from the turn of the century, yet it was shot in the ‘70s. In a word: timeless.

Cunningham donated 88 silver gelatin prints from the collection to the New York Historical Society, which will comprise the exhibition. In part, the display is in honor of Sherman, who died in November at the age of 101. But across the board, the display is homage to people and places past, capturing the where, when and how of the way New Yorkers have dressed.

BEYONCE AND CHANEL IMAN IN HERVE LEGER BY MAX AZRIA