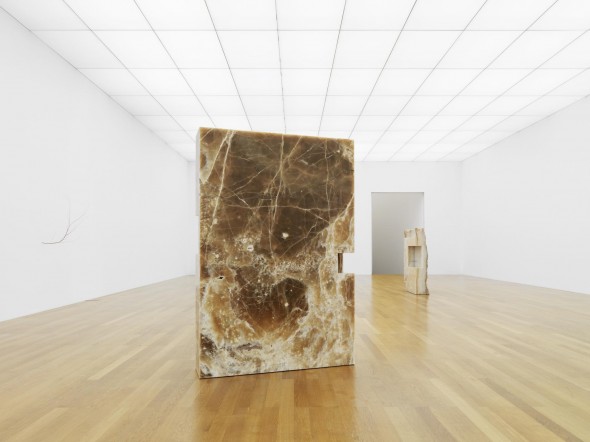 Stuart Shave/Modern Art is delighted to announce a solo exhibition of new work by Bojan Šarčević, Gyrobifastigium. This is Šarčević’s second solo show with Modern Art.

Ideas of abstraction, in the conceptual and formal senses, rest at the core of Bojan Šarčević’s practice. Šarčević’s aesthetic propositions and quite particular material relationships assert a sense of clarity and convey precise gestural intent. His work offers an invitation for close, attentive interpretation – a starting point for the perceptual encounter and experience of form that defers certainty, revealing questions of empirical, theoretical and sensual understandings of the world, and relating to the potential for artistic gesture to be imagined in a wider or politicised social sphere.

In this exhibition at Modern Art, Šarčević presents works made from elemental and evocative sculptural materials – onyx, wax, and fire – that realise beautiful expressions of abstract and mathematical geometric form. On the floor of one room rests a candle burning atop an onyx polyhedron that has been made from a flat sheet of stone as if folded according to the rules of a particular subset of polyhedra known in geometry as ‘Johnson Solids’ (convex polyhedra whose faces are formed from regular, but non-uniform polygons). On the walls, the hard and heavy fragments of this same stone hang with their mineral surfaces partially occluded with an uneven surface of poured white wax. A large and flat slab of polished onyx has been cut and reassembled from tessellating pentagonal pieces according to a pattern known as ‘Cairo’, after the ancient paving pattern found on that city’s streets.