Boy George: Photography by Indira Cesarine for The Untitled Magazine

Very few figures have held a tighter grip on an entire generation of pop culture devotees more readily than Boy George. The Culture Club frontman became the face of the 1980s largely by subverting what the mainstream had come to expect from their pop stars. In an era coming off the high of disco and the underground rebellious culture of punk, Boy George represented a new wave of musician: loud, colorful, brash, and uniquely unafraid to ruffle a few feathers. The openly gay singer became an immediate icon; his group, Culture Club, became the first cross-genre multi-racial band to hit the mainstream, as well as the first group to rival The Beatles with the most top-ten singles from a debut album. Hit songs such as “Karma Chameleon” remain staple tracks from the 80s that still get radio play today, and at the time propelled them to the forefront of the music scene as international pop stars. In 1984, Culture Club won the Grammy for Best New Artist as well as two Brit Awards for Best British Group, and Best British Single. Now, 30 years later, Boy George has released his first album of original material after a nearly two-decade hiatus, combined with an 8-stop North American tour.

Boy George will be reuniting with his Culture Club bandmates for a reunion concert series put on by “BBC Philharmonic Presents” in September 2014. Their official comeback tour will be kicking off in December 2014, with an accompanying album.

The Untitled Magazine caught up with the legendary musician while he was in New York for a candid interview and photo shoot for The “Legendary” Issue 7. Check out a preview of his interview, and make sure not to miss the full 6-page story, available now on newsstands in 30 countries. Visit our online store to buy your copy, or download the free “Legendary” Issue App on iTunes now!

Indira Cesarine: Culture Club was one of the first multiracial pro-gay bands to have commercial success. Can you tell me about the early days of how you got the band together?

Boy George: To be fair to the rest of the band, they were kind of forced to be pro-gay because of me! I think it was, for them, by default because I was such a powerful character, and I used up everything that I wanted to do. But, in terms of being a multicultural band it was kind of growing up in South East London. There were a lot of Jamaicans and Indians, that was kind of normal for us. We always had Jamaican music and Indian music, so when we got the band together, we didn’t really think of those things. Looking back it’s easier to see, because you see the bands around that time as either black or white, but we didn’t grow up with those kind of restrictions. It was just an unconscious thing that we did.

IC: The diversity wasn’t really thought through, it just happened to be the situation that you were in?

BG: Yeah we were kind of used to it. Growing up, my father was a builder so getting up in the morning and going to school it was like The United Nations in our kitchen! Jamaican guy, African guy, people who were doing labor for my father. I grew up around that and my parents were very, strangely, open-minded. We never grew up around any kind of racism or anything like that: it wasn’t in our lives. We were very lucky to not have any of that. By the time that I was a teenager, it was second nature to me to be in a band with whoever could play – it wasn’t about the color. That was something that other people kind of thought we did.

IC: How did you come up with the name Boy George?

BG: We had some photographs done of the band and John took a photo to a record label and they said ‘Oh great, who is the girl?’ and John was like ‘Oh no, that’s George!’ In fact, John’s mother, before the band got famous, he had a picture of me that he kept in his room and his mother thought that I was a woman, and the first time that I met her she opened the door and when she realized she just couldn’t hide her shock.

IC: You had your own style from a very young age, where was your inspiration drawn from?

BG: I think that when Bowie (I saw him when I was eleven years old) right before my birthday I saw Ziggy Stardust, which was a life-changing moment for me, and then people like the flamboyant rock stars and my older brother was a hipster as well—he’s a couple years older than me and he was working so he had kind of trendy clothes, and he wore a lot of unisex clothes. That was the fashion in the seventies for boys and girls, so I would often borrow a lot of his stuff. And, of course, movies: Liz Taylor, Carmen Miranda… I grew up watching that stuff. Anything exotic, really. I think it was in my genes.

IC: What were the musical influences that you had for Culture Club?

BG: Everyone in the band had different musical taste and we somehow managed to put it into one band. Everyone who starts a band has some sort of idea of what they want to be, and I certainly had a very different idea about what Culture Club was going to be and it became something completely different than what I was planning it to be. I was planning on becoming goth. With the other guys coming into the band it quickly developed into what it was going to be. Not one person really influenced the sound that much, everyone just threw their ideas into the pot and somehow it came out sounding like it did.

IC: The band’s debut album won a Grammy and had back to back number 1‘s. How did you feel about the impact that your music was having? Were you even conscious about how enormous it became overnight?

BG: It was kind of unbelievable, it happened so quickly. One minute we were normal people and the next minute we were flying all over the world, winning awards, having people screaming at us. Of course it’s a hoot, going to Australia and having four thousand people screaming and you feel amazing, but after a while it sort of becomes a little bit of a prison because it’s fun to start with but then you look outside of your house and there are always people there. It’s kind of like, this isn’t fun anymore. To start with, of course it was amazing. I think the best kind of fame is one that comes with an off button. Unfortunately, they haven’t made that yet where you can go ‘Oh I’m done now *click*!’ At a certain point it became unbearable, really. You couldn’t go anywhere without people bothering you, and taking your picture. I think in a way being famous can be kind of a job in itself. For us, specifically for me, it kind of got in the way of everything that I did creatively. Being Boy George, this sort of celebrity, was a full-time job!

Read the full 6-page interview and check out his exclusive photo shoot in The Untitled Magazine‘s “Legendary” Issue 7! See the exclusive behind the scenes video with Boy George! 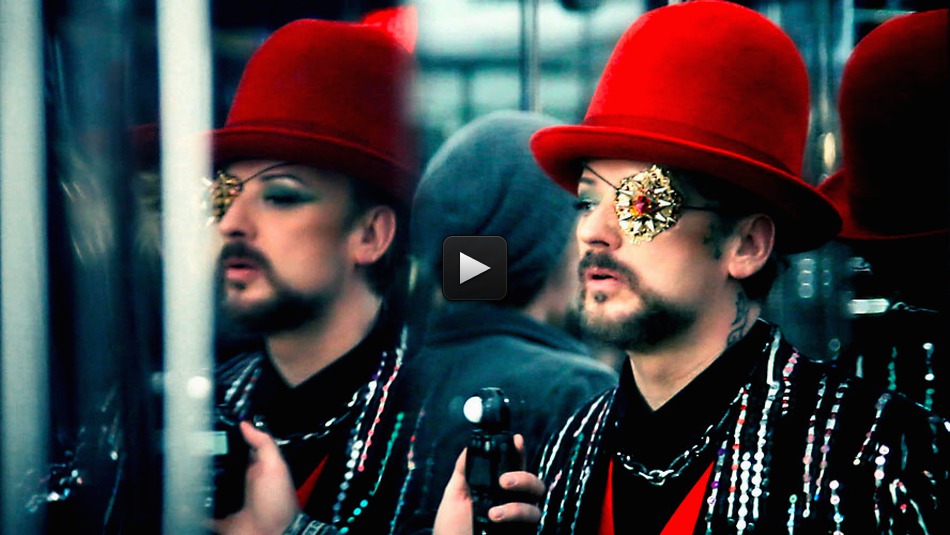