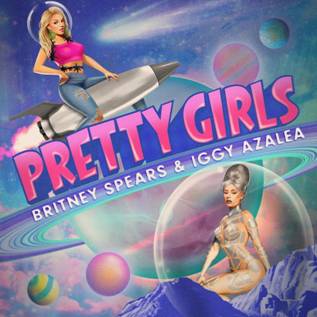 Multi-platinum, Grammy Award-winning pop icon Britney Spears & Iggy Azalea have released their new single, “Pretty Girls”. The track, which was written and produced by the Invisible Men (Iggy Azalea, Rita Ora, Jessie J), is available through all digital providers.
The track was leaked just a few days early to the public. Iggy even commented vita Twitter: “I’m really really happy to see so many people loving it, but I also just want to clarify that it’s not an “early” release it’s a leak and if you can…we would really appreciate everyone holding out until Monday to share links etc if possible (I know it’s hard, I’m excited too!).

Britney teamed up with Uber to give lucky fans in Los Angeles the chance to hear the single before anyone else. Fans were able to request a “Bee” branded Uber SUV and preview the song as many times as they wanted before their ride ended.  Britney is the first artist to use Uber to release a single.
Britney & Iggy will hit the stage for the debut television performance of “Pretty Girls” on May 17th at the 2015 Billboard Music Awards on ABC.
Britney Spears is one of the most successful and celebrated entertainers in pop history, and makes her triumphant return to national television with this special performance.  In a little more than a decade, Spears sold nearly 100 million records worldwide, making her the fourth best-selling female artist ever in America.
So far, Spears has earned a total of five No.1 debut albums and 24 Top 40 songs in her career. Spears has been nominated for eight Grammy Awards and won for Best Dance Recording in 2005. Her cutting-edge pop concert Las Vegas residency, “Britney: Piece of Me,” at Planet Hollywood Resort & Casino has been voted “Best Show in Las Vegas” and “Best Bachelorette Show in Las Vegas.”