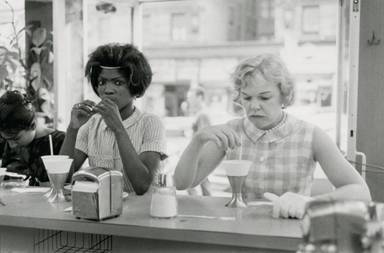 Photographs from a critical moment in America’s history by renowned documentary photographer Bruce Davidson will be on view at Howard Greenberg Gallery from June 6 – July 6. Charged with the emotion, the powerful images in Time of Change: Civil Rights Photographs, 1961-1965 depict the struggle for justice and equality during a time of Freedom Rides, protests, marches, and police violence.  More than 20 photographs will be exhibited in HGG Two, located next to the main gallery at 41 East 57th Street in New York City. An opening will be held Thursday, June 6, from 6-8 p.m.

Time of Change is presented in conjunction with the current exhibition entitled 1963, which brings together more than 40 photographs depicting events from Martin Luther King, Jr.‘s “I Have a Dream” speech in Washington D.C. to the assassination of President John F. Kennedy.

On May 25, 1961, Bruce Davidson joined a group of Freedom Riders traveling by bus from Montgomery, Alabama, to Jackson, Mississippi. The actions of these youths, in racially mixed groups, challenged segregation in bus seating in the South and led to violence and arrests. In 1962, Davidson received a Guggenheim Fellowship and continued documenting the era, including the five-day march from Selma to Montgomery, Alabama, with Martin Luther King, Jr.

Davidson’s work depicts both critical historical events as well as poignant and intimate moments. His photographs have been described as “extraordinary for the depth of their feeling and their poetic mood” and the work in Time of Change is no exception.  A black woman held by two white police officers stands in front of a movie theater marquee sign that reads, “Damn the Defiant.” Martin Luther King, Jr. is shown with Mrs. King and Rosa Parks in a 1965 print. The day-to-day existence of Southerners is depicted in images where black nannies are caring for white children, three bridesmaids are dressed to the nines, boys are picking cotton, couples are dancing near a jukebox, and hecklers are taunting the Freedom Riders in Montgomery.

Time of Change: Civil Rights Photographs, 1961-1965 was published as a book by St. Ann’s Press in 2002 to enormous critical acclaim.