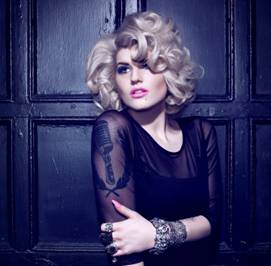 As beguiling new artist CALI unfurls her honey-soaked and expressive vocals on debut single ‘Fatally Yours’, we are introduced to a potent force that demands to be explored further.

Having premiered the track on Vevo last week, it has just been announced ‘Fatally Yours’ will be released on April 15th through New Classique Recordings.

A spirited singer-songwriter, ‘Fatally Yours’ showcases Cali’s astonishing vocal control as she breathes character and expression into every note she sings. Originally from Seattle, 22-year old Cali has been living between Dublin and London for the past three years honing her skills and music in venues across both cities. Inspired by the composers John Barry and Ennio Morricone as well as iconic singers ranging from the likes of Ella Fitzgerald, Nina Simone, Dinah Washington to Lauryn Hill, Madonna and Sam Cooke, Cali incorporates classic arrangements with strings and brass to create big, orchestral songs.

Also influenced by the films of Quentin Tarantino and Hitchcock, Cali takes a cinematic approach to her songwriting – dark, dramatic tales that attest a genuine new talent is in our midst. Working closely with Dublin and NYC based producer MisRead, Cali co-wrote her entire debut album which will be out later this year and features Chops Horns on brass (Alicia Keys, Earth, Wind and Fire, Erykah Badu), Chris Elliot on string arrangement (Amy Winehouse, Rumer, Moulin Rouge) as well as engineer Dan Parry (Adele, Cee Lo Green, Lady Gaga).