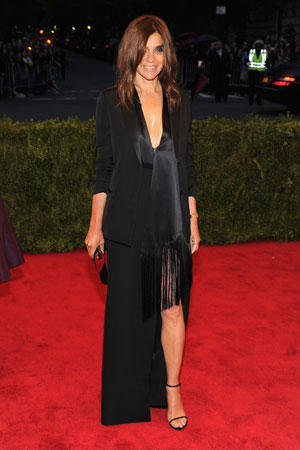 For the past eighteen years, amfAR has been hosting the Cinema Against AIDS event at the Cannes International Film Festival.  It has become one of the biggest, most exclusive events during the week’s star-studded festivites but, of course, when Carine Roitfeld becomes involved a must-attend event becomes that much more exciting.  This year Roitfeld will host and orchestrate a fashion show at the Hôtel du Cap-Eden Roc in Cap d’Antibes on May 24.  The theme of the show is all things black; the collection focuses on Roitfeld’s carefully curated idea of the perfect all-black wardrobe. According to Women’s Wear Daily, the looks will mix various designs from Alexander Wang, Balenciaga, Roberto Cavalli, Chanel, Christian Dior, Christopher Kane, Emilio Pucci, Fendi, Giorgio Armani, Givenchy, Louis Vuitton and Versace.  At the end of the evening every look from the show will be auctioned off as a single lot going to one incredibly lucky bidder, with all proceeds going to the fight against AIDS.  The event, presented by Bold Films, L’Oréal Paris and The Weinstein Co with amfAR chairman Kenneth Cole, is sure to bring out the most fashion-forward starlets, directors, and designers all for a great cause.

RAGNAR KJARTANSSON SCREENING AT THE NATIONAL THEATRE OF ICELAND - MAY 21