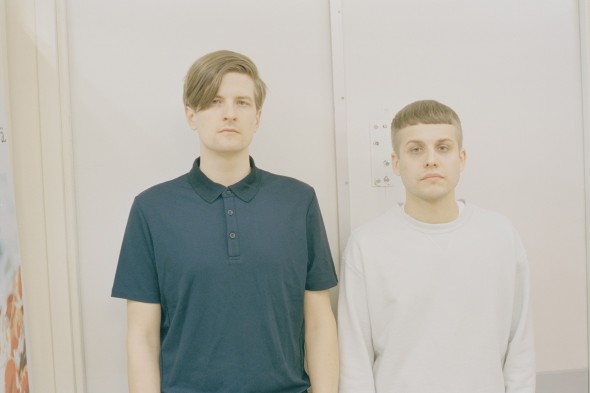 It’s a concept the band, made up of Sami Suova and Mikko Pykari,  has kept close to its heart since its members met four years ago through the underground Swedish electronic scene. At the time, both Sami and Mikko were making their own music and “trying too hard,” according to Sami, using complicated rhythms to build songs that weren’t leading them anywhere. When they united, they decided to dumb things down a bit and to be more “careless.” The result was Realism, an album that was captivating for its broad range of influences, which drew from ’90s trip-hop, indie and r&b, but also for its straightforwardness. Its songs were ambitious in theory, but they had a catchiness to them that was easy to digest.

The group recently released their follow up record, Our Nation, a project that sticks to the easy going formula used on their debut. Sami and Mikko are about to embark on a world tour to promote the album, starting with a string of shows in New York this weekend as part of CMJ Music Marathon. We were able to catch up with them in Brooklyn to talk about their new project, as well as their ambitions as musicians and what it’s like performing in the U.S. as opposed to back home in Finland.

When you two first started making music, what kind of sound did it have?

Mikko: At the beginning, it was just us getting to know the basics of music. It wasn’t until recently that we started making something interesting. The first 20 years or so wasn’t the golden age of our music. I made the first (Shine 2009) tracks when I was about 18 years old. They were more complicated than the tracks we do now.

Sami: The biggest problem with me making music on my own was that I was trying too hard. It was really hard for me to except the fact that it’s not that complicated. It’s actually really simple. I didn’t learn that until I started making music with other people.

Has simplifying your music been a big step in the learning process of creating music?

Mikko: Yeah, I think the main thing in producing is taking everything out, because it’s always easier to add things. I think the first mistake is to put too much stuff in it. A good thing (about us) is we’ve never loved our ideas. We can work on a bass line for like two weeks and then throw it away if it sounds bad. It’s something we’ve really learned.

Sami: I guess that’s the hardest part of producing. The more minimal music is, the harder it is to make. The greatest part of working together is that if you’re stuck in a situation with a sound or a bass line (that doesn’t sound right), it’s so much easier for the other guy to say that’s the problem. If you’re working by yourself, it’s those things that you don’t spot.

When you first came together, did you ever picture that you would make a career off making music?

Mikko: That was never the plan; it just kind of turned out this way. I’m still a little bit surprised, because I’ve never thought of myself as a musician. I just make music.

Sam: I wasn’t thinking this as a career until this year, so this is pretty new to me. Once we got the second album done and we realized we had a bunch of good labels behind us, that was the changing point.

Speaking of the second album, how would you say it’s different than Realism?

Mikko: I think we wanted to focus on the songwriting in the beginning. We actually started to make a different album (under a different name). It was anything that came across our mind really. We learned that we can do anything. We started putting together stuff that usually doesn’t coexist. It’s more free, I guess.

Sam: We found out that no matter what we do, we still end up sounding like ourselves. Someone could say it still sounded like Shine 2009 even though that wasn’t the intention. It just felt so much better that way. We were just throwing stuff out there, and it turned out really good. We used that (same idea) on the Shine album; it was just a careless approach.

I think sometimes you guys get mistakenly grouped together with all the music that is coming out of Sweden right now. I would say you guys have a different sound than those bands. Would you agree? How would you describe your own sound?

Mikko: It’s different, but I don’t know how.

Sami: We might not be the best people to describe our own sound. It’s who we are. People are really inconsistent in what they like. You can like vegetarian food but you can have a craving for sausage. It’s the same thing with music: You can like Shakira but at the same time it’s possible to hate Lady Gaga. It’s what we are. It’s the ingredients we hold inside ourselves.

How is it performing here compared to back home in Finland?

Sami: They’re really more open to what we do. It’s better. The further away you get from Finland, the better it gets. The reaction we got (when we performed here last) was really positive. People were moving. I remember it was the first time we played new songs; no one had heard them before, but they still reacted to them.

Mikko: The people (in Finland) are a bit uptight. When they’re watching shows, they’re always just standing and not showing any emotion. I’m kind of like that myself, so I’m not one to judge that, but it’s just how it is over there.

Do you guys hope to achieve anything with your music?

Sami: The feeling somehow. If you make music carelessly and you’re not being too uptight about it and you’re open to new ideas and experimenting, I think it’s good. I think it’s something people kind of feel when they listen to music. And I hope it makes them better people or something eventually. It’s always nice to be an inspiration. I always get inspired by other people, so it’s cool if they get inspired by me. I would say that’s a justification of making music.

Last question: Every piece I read about you guys starts off with the question, “Why 2009?” Can you clear the air on that?

Mikko: It was kind of a experiment, starting when we first came together. I remember the year when we started, 2009, we didn’t even pay attention to the name. Now people are paying some attention. It’s an interactive name.

Sami: You automatically get this disposal feel; it feels like a project that might have one or two songs out. But I think it’s cool to just keep on doing music with the same name, and the year just sticks there. And people always wonder about it, so that’s a good thing as well.