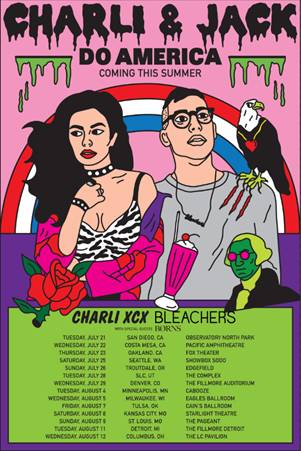 Two of our favorites, Charli XCX and Jack Antonoff of Bleachers announced that they will be “Doing America” this summer, co-headlining their tour starting in July.  They will kick off in San Diego on July 21st supported by BØRNS, with the second leg starting in September 14th in Boston MA, supported by Robert DeLong. Charli and Jack are excited to work together again after their Complex’s In-Ride Sessions: Charli XCX and Jack Antonoff Trade Remixes.

“I love Charli. I love what she does with pop music, how she makes it bizarre. The two of us do totally different things but occupy a similar space–that’s what I loved about the idea to tour together.  It makes sense in the fact that it doesn’t make sense.” —Jack

“I love Jack.  I love what he does with pop music, how he makes every song feel like a movie.  This tour is gonna be cool and weird and fabulous and I really can’t wait.” —Charli

Don’t miss our recent interview with Jack Antonoff for The Untitled Magazine, and Charli XCX’s exclusive photo shoot by Nick Rhodes for our “Music” Issue 6.