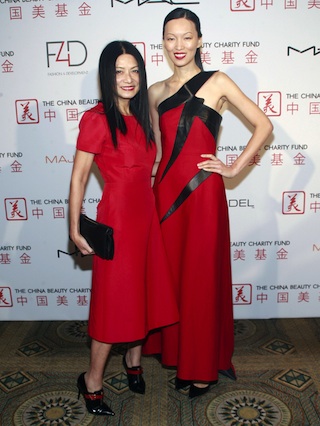 Yue-Sai Kan and her China Beauty Charity Fund held its inaugural gala China Fashion Night  at the Pierre Hotel.  The gala benefited a scholarship at FIT to enable emerging talent from China to study at FIT and also honored Chinese fashion pioneer, Vivienne Tam with an award presented by Petra Nemcova, as well as introduced China’s preeminent haute couture designer, Guo Pei.  Guo’s debut presentation featured acclaimed pieces from her “Legend of the Dragon” collection, including a gown inspired by stained glass domes of European churches and a gown adorned with several thousand “Gong Hua”, silk flowers made exclusively for the royal palace and were rescued from the storage room of a deserted factory and carefully restored with steam — the entire process took nearly 50,000 hours!  Guo’s designs are known for merging modern influences with classic Chinese elements, from embroidery to traditional patterns; her ability to highlight and preserve the origins of Chinese fashion, with contemporary and artistic influences transcends geography and has secured her the distinct honor of being awarded the commission for the ceremonial dresses featured during the 2008 Beijing Olympics. Guo’s sculptural creations made at her magnificent Rose Studio, have drawn admirers around the world such as big screen actress Zhang Ziyi, Fan Bing Bing and Lady Gaga.