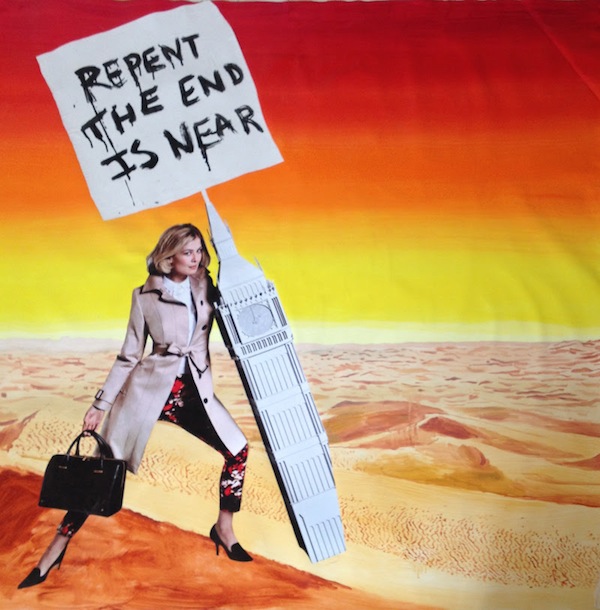 Christine Wang: I Want That Bag
Jo Nigoghossian: New York
Night Gallery
2276 East 16th St, Los Angeles 90021
May 24 – June 28
Beginning May 24, Night Gallery will open two new exhibits presenting the work of Brooklyn-based artists Christine Wang and Jo Nigoghossian at their Los Angeles space. Details about each exhibit below.
CHRISTINE WANG: I WANT THAT BAG
To say the Syrian Civil War feels good sounds callous, even cruel. But if she wants to be honest, and she does, that’s roughly how it felt to Christine Wang during the year she spent living in Qatar. That country, thanks to its oil reserves, has the second highest per capita GDP in the world, and it’s using that wealth to fund Syrian rebels and funnel more weapons into Syria than any other foreign source. It’s also because of that wealth that the art program at Virginia Commonwealth University in Qatar could pay Wang for her art expertise, give her space to work and students to teach. So while it’s certainly indirect, it’s still more or less true to say that Wang’s life became more comfortable because she was in a place with enough resources to fund Syrian rebels.Intellectually, she knew about Qatar’s political activities, its notorious overuse of electricity and water, its labor exploitation, and the financial support its government gets from the nearby U.S. military base but, surrounded by evidence of the country’s wealth, she didn’t necessarily feel the effects of those things directly. This cognitive dissonance is what the work in “I Want That Bag,” all made during the year Wang spent as an artist in residence in Qatar but certainly not relevant to just that country, explores.The wall pieces in the show, made of different found fabrics attached to each other and then painted, have the bright palette of those plastic coated maps or charts teachers post in classrooms. They’re slipshod in the way they’re hung, with string through grommets, and in the way they’re assembled, with corners of different fabrics sometimes sticking out from all edges. But the acrylic paint on them, often applied using stencils, gives them deliberate smoothness. After Tiepolo combines majestic religious imagery with global warming statistics. World Map has a stenciled rendering of a world map across it, with the words “I’m with Stupid” in gold lettering at the center and a quote by Vaclav Smil, the wry environmental scientist who wrote the book Global Catastrophes and Trends, scrawled along the bottom, dryly poking at the human species’ inability to limit energy use.The impulse behind this work resonates with confessionally aggressive art from previous eras, by Lee Lozano, Cady Noland or Sue Williams. It also relates to a more current push in art to acknowledge anxiousness and ambivalence without being apathetic or marketably cautious. Meshing your own raw experience with historical iconography, current events and Internet age phenomena can be a way to deal with the problems of being a conscientious person in a world that’s unwieldy, precarious but very real. That’s what this show tries to do, grapple with the self-in-relation-to-world conundrum in a visually compelling way that gets at what it feels like to have too many contradictory sensations acting on you at once.
JO NIGOGHOSSIAN: NEW WORK
Centered on a fitful negotiation between material, image, and firsthand experience of a sculptural object, Jo Nigoghossian’s recent work attempts to locate, crop, and describe a sculpture’s potential to trespass. Her preoccupation with persistent materials that demand reaction and consideration is present in the pieces on view – anthropomorphic steel buttresses variously corseted and punctuated by neon and rubber. Gestural, and at times menacing, these works belie the obsessive observations that precede their making: a taxing research into the rules that dictate space and govern activities of destruction and preservation.
With the belief that “when things are easy to see, something’s being hidden,” Nigoghossian considers the space occupied by human thoughts, moods, and capabilities, the human desire for structures of control, and the subsequent reaction against those restraints. She uses sculpture as a means to study the physical changes engendered by proximity. Strongly influenced by German Expressionists Ernst Ludwig Kirchner and Otto Dix, Franz Xaver Messerschmidt’s Neo-Classical character heads, and theorist Hannah Arendt, Nigoghossian’s material manipulations embody the fragile state of shifting orders, temperaments, confrontations, and limits in which she creates them. 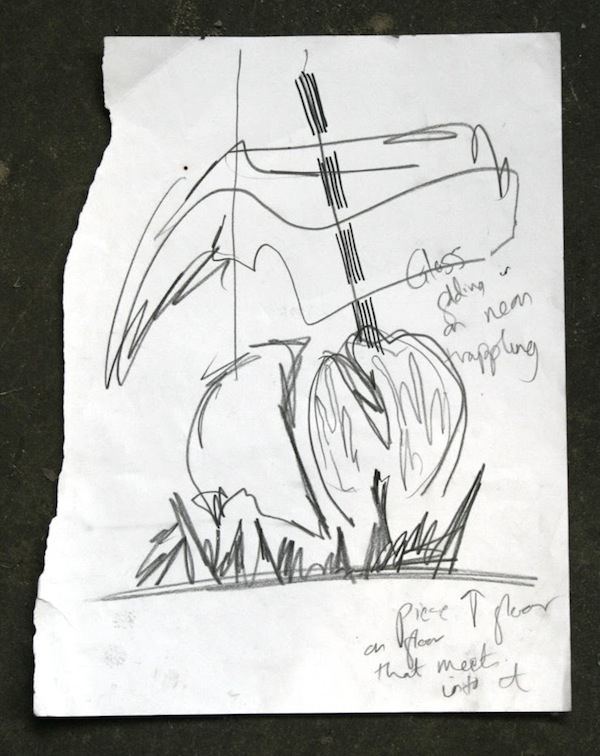