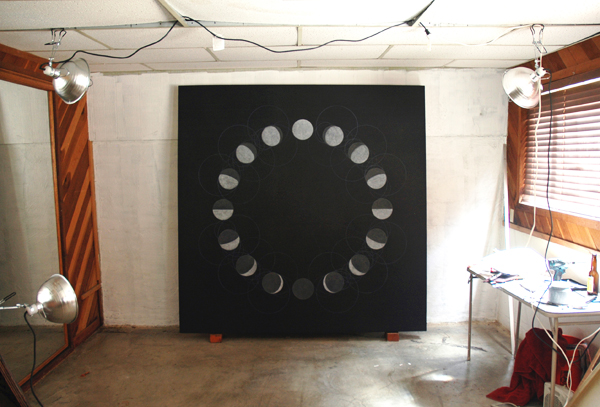 Jessica Silverman Gallery is pleased to present “Lunar Mirror,” a show of new work by Christopher Badger, on view from March 22 to May 4, 2013.

The exhibition will debut a series of sculptures made of polished cast aluminum called “Lunar Mirrors,” and a 7×7 foot chalk-and-oil painting, titled “Shadow Phase.”

Inspired by artists such as Robert Smithson, Sol LeWitt and Heinz Mack along with ancient Greek geometers and NASA photographers, Badger continues his exploration of abstraction and earthworks. Using the moon as his touchstone, this body of work also advances Badger’s interest in objective maps with subjective associations as well as the ambiguous relationship between reflections and projections.

In making the “Lunar Mirror” reliefs, Badger starts with aerial photographs of the moon produced by the Apollo 15 crew in 1974. He traces the topographical lines of the photos, makes a vector map, and uses a 3-D modeling program to create digital files from which the works are cast. The resulting aluminum sculptures are then polished to a fine mirror finish so that the viewer can see his/her own reflection, rippled and distorted, in its surface. The resulting reflections, like the moon itself, appear and disappear; they are constant but changing, unattainable but common to all.

“Shadow Phase” is an elegant abstract painting on black gesso ground. On top of the smooth surface are white lines made of chalk and oil that hark back to classical Greek mathematical equations from 300 BC and Minimalist ideals of beauty from the 1960s and 70s.

As Leonard Cohen memorably put it, “They’ll never ever reach the moon, at least not the one that we’re after.”