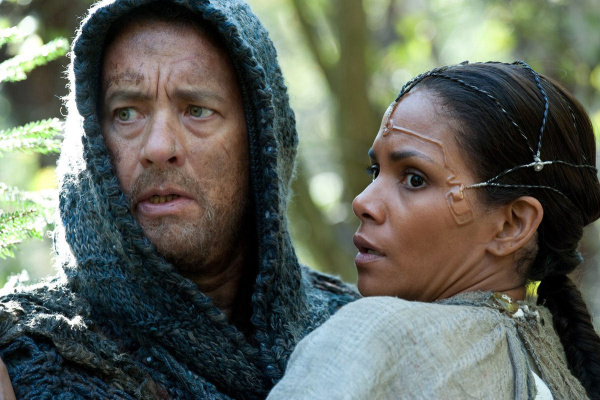 Cloud Atlas tells many tales; quantity is the only thing guaranteed. In an age where Hasbro toys serve the kind of cinematic inspiration that great writers once did, what to make of ambition? Of wanting more out of the movie-going experience, not as a viewer but as a filmmaker? I often find myself forgiving a film’s faults when it’s attempting to do something interesting with the canvas that is cinema. But something interesting is happening in Cloud Atlas, and it’s strangely in found the ways the film doesn’t work more than the ways in which it sometimes does.

Directed by Lana and Andy Wachowski, Cloud Atlas opens with a montage of six different stories before the title card even comes on screen. The first takes place in the South Pacific in 1850, with an ailing American on a ship (Jim Sturgess) who is being poisoned by a vile doctor (Tom Hanks, in his first of many roles). We’re then taken to Cambridge in the early 1930s, as a composer (Jim Broadbent) engages in a messy game of ownership with his young amanuensis (Ben Winshaw) over a symphony titled the Cloud Atlas Sextet (do you see what they did there?) Then we cut to San Francisco in 1973, where a reporter (Halle Berry) is put in danger after she uncovers a corporate conspiracy far larger than her. In present-day London, a publisher (Broadbent again, in arguably the film’s worst storyline) is slapstickishly imprisoned in a retirement home. In 2144, Sonmi-451, a female “fabricant” (similar to the “replicants” in Blade Runner, and not the last reference to said film) attempts to free herself from the bonds of cyborg slavery in a totalitarian future. And finally, centuries from now, long after an apocalyptic event cryptically referred to as the Big Fall has relegated mankind back to primitive status, a tribesman (Hanks again) meets one of the last remaining survivors of the once-advanced civilization (Berry again). The most immediate connection between all six stories is a reoccurring birthmark, shaped like a comet shown on a variety of characters.

The film’s form differs greatly from the 2004 novel it’s based on. Where in the novel the stories are handled chronologically, each developing until a character in the next chapter interrupts, and then circling back and closing each storyline once the book reaches its midpoint, the film opts for sensory overload by way of crosscutting, making the three-hour film feel like cinema’s longest-running montage. Each character in the book is found to be reading some sort of text related to the story it interrupted: the journal of the American in the 1850s is being read by the amanuensis in the 1930s, whose love letters are found by the reporter in the 1970s, whose manuscript is being handled by the publisher in the present day, whose story was made into a film beloved by the freed fabricant in 2144, whose own legend has been passed down through time, until she becomes a deity to the island dwellers who survived a revolution she theoretically prompted.

Cloud Atlas is certainly ambitious in scope, and in that way it’s difficult not to credit the film for attempting to utilize all it is that cinema has to offer in the way of both technique and sheer audacity. But when the film winds down, one is left questioning what the sum of the experience should be. There is only a loose, central thesis that attempts to tie the film together. It’s telling ten stories, but it thinks it’s telling one, and I found myself remarkably passive when watching these stories unfold; it comes across like patchwork. 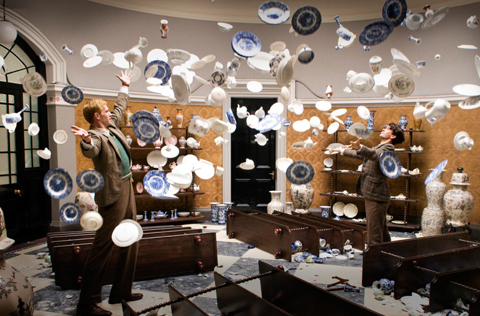 Yet at the same time, it doesn’t feel open enough. The film feels too loaded to leave any room for interpretation, while simultaneously feeling too interpretive to access it’s larger questions, if there are any to reach for. It’s a film so obsessed with its own mechanics that it’s a wonder it took a minute to breathe. Where science-fiction used to take us to the dizzying-heights of human potential by highlighting the ridiculous and passing it off as progressive, post-Inception fatigue has, instead, already begun to set in: it seems now that the only way to make quality science fiction is to be so enamored by your own rules that you forget they need to occupy an actual narrative space. What we’re left with, instead, is a sense that crafting an enigma—however incomprehensible—is a way of telling the audience it’s too smart to dare say the film makes no sense. It’s belittling by way of back patting.

What makes the film strangest is that it is perceived to be a story about people, but we’re left feeling that the characters were used as nothing more than props, both for the benefit of the film’s visual stimulus and its prosthetics department. They serve no purpose other than to hold the strings that tie the film’s excessive buffet of genre and location. In that way, Cloud Atlas is a film at war with itself, a meganarrative that at its is core a character study that, when viewed as a whole, shuns its characters of real motivation or interest.

The strengths of the performances come and go, with many of the core, seasoned actors playing multiple rolls: Berry is as mediocre as we’ve come to realize she’s always been; Hanks is effortlessly fun to watch, if not at his best here; Hugo Weaving snarls enjoyably, always speaking in the same cadence that made both us and the Wachowskis fall for him as Mr. Smith in The Matrix trilogy. But it’s South Korean actress Doona Bae, who plays Sonmi-451 who stands out most. She plays an unwitting revolutionary (who is believed by some to be the key to dismantling a totalitarian, consumer-centric Neo-Soul—though what makes her such a viable candidate for revolution is left unknown). Her quiet moments—at the tale end of an interrogation scene; while delivering her philosophy as war breaks out in front of her—finally achieve some of the humanity that the film obsessively tries to highlight.

There is this sense that every story in Cloud Atlas should connect, and through that conceit we’re essentially told that each story is of equal value—that each life matters just as much as the one before it. Not to be the curmudgeon who asks faux-philosophers to keep it down, but that mission statement doesn’t pan out. It’s clear that Sonmi’s story ties most directly into the 24th century chapter that comes after it; in many ways, it’s Sonmi’s story that speaks to all six of the chapters in some threadbare way. But by distributing her onscreen time just as evenly as, say, the heinous story of a publisher trying to escape an old folks home, we’re left to parcel out meaning evenly from each chapter, as opposed to take a tenant theme and thread it backwards and forwards.

As a result, everyone ends up taking a backseat to the film’s weaving of strange themes: the natural relationships that develop between the oppressors and the oppressed; the notion of karma and reincarnation; the binding of time through experiences shared; and finally, how best to milk the $13.50 of a typical movie ticket. The answer for the latter is: make a lot of movie, ice cream-scoop out any semblance of meaning and then stitch it together using string-heavy scores, philosophical ramblings and Halle Berry in whiteface (seriously—Halle Berry in whiteface).