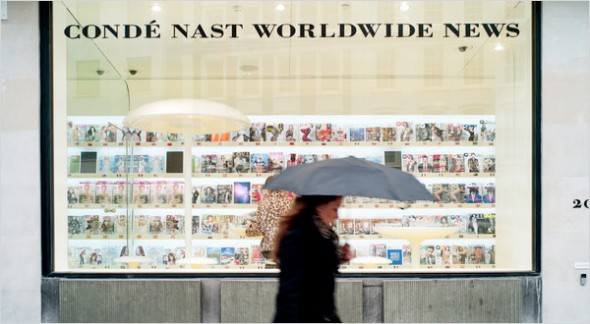 Consider the term “consumer magazines.” Magazines created for people who are willing to pay in time, money, or both, just to consume information that tells them what else they should consider consuming. Oh, the circle of life. If you’re reading this, you’re probably a consumer.

Until now, there has been a barrier between what magazines suggest and what readers have to do to obtain their suggestions. They’ll tell you what to buy, but it’s up to you to figure out how to buy it. Considering this is the age of convenience, things are changing.

On Dec. 6, Condé Nast announced that its U.S. and international units will be teaming up for a new global e-commerce division. The company tapped Franck Zayan, a former e-commerce consultant and presently the overseer of the high-end French department store Galeries Lafayette’s online site, to be the division’s president. Beginning his new position on January 6th, Zayan will report to a board of directors including Jonathan Newhouse, chairman and CEO of Condé Nast International, who said in a statement that the new division will “explore and develop ideas which can serve our readers, users, advertising clients and business partners.”

So far, Condé has been investing in existing outlets rather than creating their own. In early 2013, Condé Nast Germany purchased a 26 percent stake in online high-end design store MONOQI, as well as upping their stake in online luxury jeweler RenéSim to 46 percent. The U.S. division recently announced a partnership with Amazon for all-access subscription sales – granting Condé access to Amazon’s consumer data. They have also established a partnership with Project Décor and have invested $20 million in upscale online reseller Vestiaire Collective.

So what do the numbers mean? So far they’ve proven a way for Condé to start dipping into e-commerce waters while keeping the titles of their publications dry as they figure out a model that will work. Because, as any online-shopper knows, e-commerce can go terribly wrong.

In early November of 2011, Esquire (a Hearst Corporation magazine) launched CLAD, a men’s clothing e-commerce site, in conjunction with J.C. Penney. The site paired sales with issue themes, featured articles and featured advice sections from the magazine’s editors. However, by the end of January 2012, J.C. Penney announced that they were pulling out of the endeavor.

Perhaps not enough readers had iPads and Smartphones in 2011 – devices that make these models possible. Think of Into The Gloss, the hugely popular beauty blog that reads more like a magazine than daily journal entries. Profiles of designers and celebrities link every mentioned product to online retailers, connecting content and product in a subtle, unobtrusive manner that could never work in print. Click or don’t click; the choice is left up to the reader.

It’s too soon to predict what Condé’s manifestation in the world of online shopping will look like, but the company hopes to have its endeavor coming to fruition by the end of 2014. More than 164 million people consume Condé Nast’s twenty media brands in the company’s U.S. division alone. It will be interesting to see if those magazine consumers are ready to cross the line from reading to shopping from Condé Nast.

Image from The Fashion Spot.