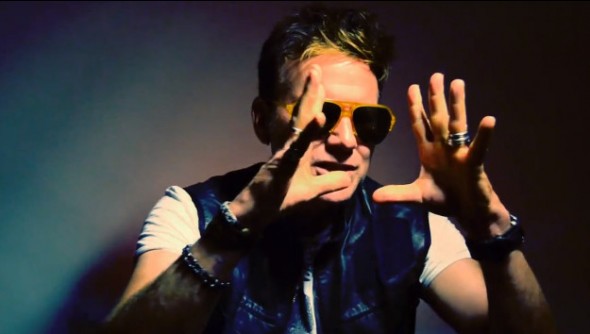 Thirty years after the release of one of the most recognizable songs of the ‘80s, Corey Hart’s monumental debut single “Sunglasses At Night” is reborn in an exciting new incarnation as “Night Visions (Sunglasses).”  Collaborating with American producers and remixers Papercha$er (Rihanna, Christina Aguilera), Corey re-entered the studio and recorded a new vocal for the iconic classic, now revamped as a pulsating EDM track. The resulting single, “Night Visions (Sunglasses)” not only includes a striking new vocal performance by Hart, but a new melody and lyrics with a suggestive Russian motif.

Originally released in Canada in November, 1983, “Sunglasses At Night” was a thirteenth hour addition to the album ‘First Offence’, but became an inescapable smash in 1984, catapulting Corey Hart into global superstardom. Over the years, numerous artists have requested permission to interpolate, remix and revisit the famous song, but this is the first recording with Hart’s authorization and collaboration.

In 2012, Papercha$er approached Corey with a unique proposal asking the singer if he would be willing to creatively re-sculpt “Sunglasses” on his own terms—Corey Hart interpolating Corey Hart? “I could never reconcile the concept of interpolation,” explains Corey Hart. “As a songwriter, it always felt wrong to me. Many musicians I deeply respect stand on the other side of the aisle, but ultimately an artist must follow his own musical compass.” Hart was impressed by many of the remixes Papercha$er had done in the past including Rihanna’s “Where Have You Been”, Kelly Clarkson’s “Stronger”, and Mariah Carey’s“Triumphant (Get ‘Em)”; and Hart adds, “It really felt like a great fit.”

“’Sunglasses At Night’ was undoubtedly one of those classic records that transcended music and enmeshed itself into the cultural fabric of a generation,” notes Papercha$er. “The opportunity to add our contemporary sonic touch, and work with Corey personally, was both irresistible and inspiring.”