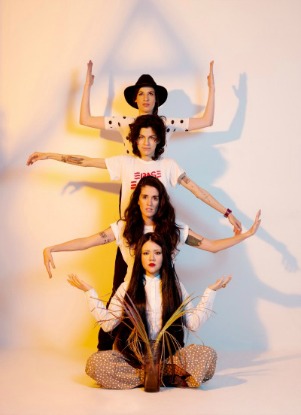 On a mission of self-improvement, the ladies of CSS have stepped in to update the wardrobe, home decor and diets of friends and fans alike in their latest three-part CSS Makeover webisode series.

Released today is the third and final part of the series in which Lovefoxxx, Luiza Sá, Ana and Carolina give a Brazilian makeover to Andrew before his first-ever trip to the South American country.

Released on June 11th  just in time for summer, CSS’s latest album Planta has an energy can’t be denied, from the shimmying and shaking electro-fied opener “Honey” to the tambourine dream of “Faith in Love.” In many ways, the album’s boundlessness has been CSS‘s goal since the beginning. Other standouts included “Dynamite” featuring friend and guest Hannah Blilie of The Gossip and the album’s breakout single “Hangover”, which was co-written with Tim Armstrong of Rancid.

CSS fans will get their chance to see “Hangover”, “Honey” and the band’s many more danceable tracks this summer on their June and July US tour.