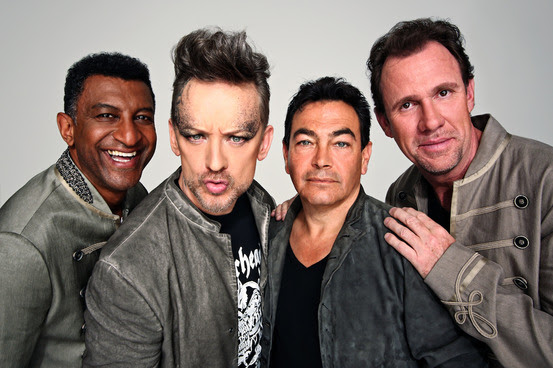 Legendary UK band Culture Club have just announced North American tour dates this fall and as well as a new album slated for release in early 2015. The tour will begin in November on the west coast and, for the first time in 14 years, feature all of the original Culture Club band members: Mikey Craig, Roy Hay, Jon Moss, front-man Boy George performing together. Tickets for the upcoming shows go on sale this Friday.

Boy George will also be making an appearance this Thursday, August 14th as a guest alongside Taylor Swift on NBC’s Late Night with Seth Meyers.

With a thirty-plus year career under their belts, the Grammy winners first rose to stardom in the 1980’s as one of the UK’s biggest exports of the 20th Century. With multi-racial band band members and an openly gay front-man, Culture Club was certainly ahead of the “culture curve” and defied many norms of the time period. They eventually became the first group since The Beatles to have three Top Ten hits in the United States from just their debut album alone, with having sold over 100 million singles and over 50 million albums worldwide, with top 10 hits in every country.

Check out our exclusive interview with Boy George from The Untitled Magazine’s Legendary Issue here.

Make sure to check out our exclusive interview with Boy George where he talks the early days of Culture Club!

THE RISE OF THE 'REAL' MANNEQUIN