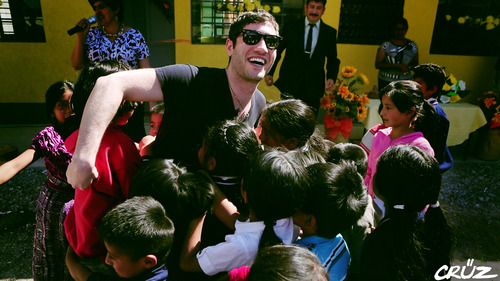 The 21-year-old 3LAU is proving the power of dance music knows no bounds. With the help of his fans, friends and family, 3LAU recently inaugurated a new school in Guatemala with the non-profit organization Pencils of Promise, and a 2nd school is on the way! In order to raise the funds for the second school, 3LAU decided to donate $1 from every ticket sold on 22 dates of his 3LAU Your Mind tour to the cause. Through these efforts he was able to raise $10,876 — nearly half the necessary funds — towards the second school. As reported in an exclusive interview with Dancing Astronaut:

3LAU partnered with the non-profit organization to build three schools in developing countries. By donating allthe proceeds from his single, “Back to New,” Justin was able to raise the requisite $25,000 for the first school within two months, and now the Justo Rufino Primary School in Guatemala is already up and running. After paying the school a visit Justin reports; “their appreciation of the school, and dedication to the youth of the community was unlike anything I’ve ever seen.”

In order to raise the funds for the second school, he decided to donate $1 from every ticket sold on 22 dates for his 3LAU Your Mind tour to the cause. Through these efforts he was able to raise $10,876 — nearly half the necessary funds — towards the second school.

Although 2012 included huge strides in 3LAU’s career as a philanthropist and raging DJ, 2013 will certainly be the year 3LAU raises the bar yet again. 3LAU’s ultimate goal is to build 3 schools for children in developing countries, however he’s taking a break from life on the road to record original music.

To hold his fans over during this break,  Dancing Astronaut also exclusively premiered his monthly super-live mix titled 3LAU Haus Mix, #10 (Don’t Blink) featuring 22 upbeat tracks glossed over by 3LAU’s seamless mixing skills for pure sonic candy. Vibe with his new exclusive mix on Dancing Astronaut and prepare for what 3LAU describes as “a 30 minute mindfuck” leaving the listener with the reaction “what the fuck did I just listen to?”.

The 3LAU Haus #10 Track listing is below.