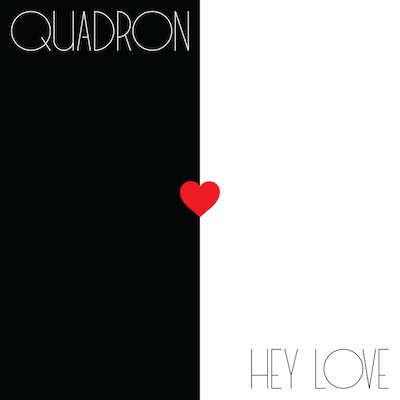 Danish duo Quadron, which is vocalist/songwriter Coco O. and multi-instrumentalist/producer Robin Hannibal,
will release their yet-to-be titled new album on June 4th via Vested in Culture/Epic Records. In celebration of the new album, the band is thrilled to release “Hey Love,” a collaboration with British producer Fraser T Smith (Adele, Florence and the Machine), available now.

Hailing from Denmark and now based in Los Angeles, Quadron first began to attract attention with their 2010 self-titled debut album, which New York magazine ranked No. 7 on its list of the Top 10 albums of 2010. A year later, Raphael Saadiq invited Quadron to be the opening act on his 2011 tour. “Quadron caught me off guard in a very cool way,” says Saadiq. “Coco’s passionate vocal performance coupled with Robin’s beats and chord combination choices is fresh yet classic.”

Other luminaries have weighed in, including producer Mark Ronson, who exclaims “they’re dope as hell!”, British soul singer Jessie Ware, who says “Coco is the most perfect singer,” and The Cool Kids’ Chuck English, who name-checks Quadron as his “favorite group. Period. As far as new music goes, there’s nothing better.” Odd Future’s The Internet credits Quadron with “changing my entire outlook on music and where you can go with it,” while the hip-hop collective’s leader, Tyler, The Creator, says, “Coco O. has the voice of an actual angel.” Coco recently joined Tyler, The Creator and The Roots on Late Night With Jimmy Fallon to perform their collaboration “TreeHome”.

“I am thrilled to be working with Quadron,” says Sylvia Rhone, who has signed the duo to Vested in Culture, her joint venture with Epic Records. “I am committed to supporting artists who are innovators and are looking to impact culture, which Robin and Coco certainly have the potential to do. They are great songwriters and Coco’s voice gave me chills the first time I heard it. Signing them was a no-brainer.”

Quadron are currently putting the finishing touches on the new record. More details about the album will be revealed in the coming months.