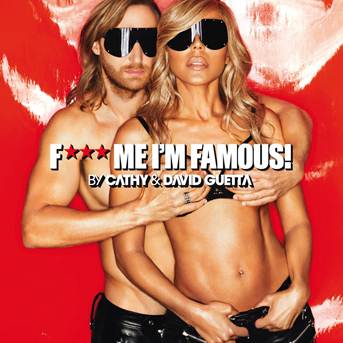 “F*** ME I’M FAMOUS 2013” is kicked off by Guetta’s latest club single, “Ain’t A Party,” an electrifying collaboration between Guetta and rising Dirty Dutch duo GLOWINTHEDARK featuring British vocalist Harrison. The track – available now at all US DSPs – has blown up on the international club and festivals, gaining worldwide acclaim as one of the summer’s most high-octane club anthems. ““Ain’t A Party” boasts guitar-laden, rock-influenced hooks and deep, echoing drops to juxtapose the live instrumentation” denotes Dancing Astronaut. It’s a bridge as David stays close to his roots while working on his next studio album. It’s a mix for those who know him as a DJ – and a gift to those who only discovered his beats through the radio explosion – his mission was to share the culture of clubbing. And boy, has he done that.

“F*** ME I’M FAMOUS 2013” is the soundtrack to Cathy and David Guetta’s infamous annual residency at Pacha, Ibiza and Ushuaia. Ibiza is the summer home for the worlds DJ elite; and the ultimate destination for party people. It’s where he lives and breathes between tour dates. He is Ibiza and Ibiza is him. The 2013 mix features some of the year’s heavyweight club tracks. Spanning surefire floor fillers, underground favorites and chart-topping club hits – all flawlessly blended together by Guetta. Highlights include Guetta’s own recent remixes of Empire Of The Sun’s ‘Alive’ and Armin van Buuren Feat. Trevor Guthrie’s “This Is What It Feels Like,” Calvin Harris’ “Sweet Nothing (Feat. Florence Welch)” and Avicii vs. Nicky Romero’s “I Could Be The One,” plus his proteges Daddy’s Groove with Cryogenix’s “Vertigo” and his collaborator, Laidback Luke & Hardwell’s “Dynamo.”

With worldwide single sales now in excess of 35 million and album sales of more than 8 million, David Guetta is widely acknowledged as the world’s hottest DJ. The truly international producer/DJ’s most recent artist album, “NOTHING BUT THE BEAT,” made a top 4 debut upon its 2011 release, while also topping Billboard’s “Dance/Electronic Albums” chart. The collection – which includes the blockbuster singles, “Where Them Girls At (Feat. Flo Rida & Nicki Minaj),” “Without You (Feat. Usher),” and “Turn Me On (Feat. Nicki Minaj)” – earned Guetta his second consecutive GRAMMY Award nomination as “Best Dance/Electronica Album,” following the nod received by 2009’s international breakthrough release, “ONE LOVE.” Alongside eight career-total GRAMMY nods thus far – including two wins in the “Best Remixed Recording, Non-Classical” category – Guetta’s many other honors include a 2012 American Music Award (for “Favorite Electronic Dance Music”) and a triumphant year atop DJ Mag’s prestigious “Top 100 DJs” poll.

Guetta – who recently teamed with Rihanna for the European leg of her “Diamonds World Tour” – is among the planet’s hardest-travelling DJs. In addition to his regular Thursday night residency at Pacha, Ibiza, his upcoming itinerary includes countless fesitival headlines around the world as England’s renowned Creamfields (August 25th). His already legendary performance at Tomorrowlands saw him, Nicky Romero & Afrojack back to back to over 100k clubbers. It’s been viewed over a milion times this week! Here in the US, Guetta is slated to rock New York’s Electric Zoo Festival on August 31st, followed September 29th with a headline performance at Atlanta’s TomorrowWorld Festival. For up-to-the-minute tour details.