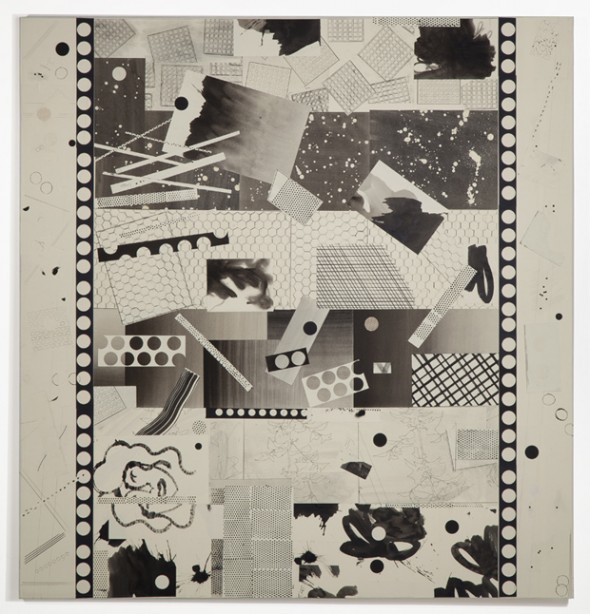 Night Gallery is pleased to present “New Paintings” by David Korty, the artist’s first solo exhibition with the gallery. In his latest works, Korty collages inked patterns and images onto a metaphorical filmstrip. Rather than relating linearly, as frames in a film, Korty’s hand-drawn frames are stacked, neighbored, and overlapped like apartments in a city or trees in a forest. Limiting his palette to black ink, Korty’s frames include traced shadows of plants, hazy gradations, anonymous figures, stamped fruit, and automatic rubbings made from wire and hot glue. The filmstrips in Korty’s paintings are not tied to camera or celluloid but to montage and memory. They relate not to film’s physical attributes but to its consciousness. It was made like a piece of automatic writing. It was in the editing that the pieces of the puzzle came together, and it wasn’t me who designed the puzzle1. This automatic puzzle, the study of film through still images, is the fabric of David Korty’s paintings.

#BirdInFlightConstatineBrancusi #concentrated not on the #physicalattributes of the #bird but #onitsmovement — from a #Romanianfolklegend about a magical bird who had #supernaturalpowers. She was the #queenofthebirds with a #beautifulvoice #onlythechosen could hear and her voice had the potential to #makethelistener #younger.

The affective imprint of cinema is not from its enchantment through moving images, but in its presentation of time, writes Deleuze in Difference and Repetition. Stepping into a theater we encounter worlds where time can be stretched like elastic, contracted, or even stopped. In Korty’s paintings time exists on a geological scale. It is stretched so far as to be virtually static. This stasis invites a different kind of looking in which the eye and mind become active agents and blinking becomes a kind of editing.