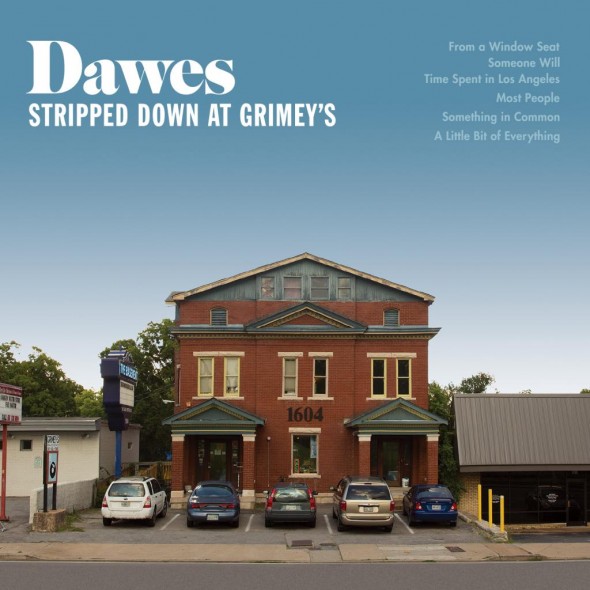 Dawes is releasing their special, upcoming live album titled Dawes: Stripped Down at Grimey’s. Being released as a limited edition 12″ on orange vinyl for Record Store Day’s Black Friday on November 29, Dawes: Stripped Down at Grimey’s will feature six live audio tracks taken from the band’s in-store performance at the legendary record store in Nashville, TN, on March 20, 2013.

Prior to the band’s 2013 summer tour that found them opening for Bob Dylan and performing a number of headline and festival dates, Dawes performed at a handful of independent record stores across the U.S. just ahead of the release of their critically acclaimed latest album, Stories Don’t End, to show appreciation to supportive indie retail and the band’s devoted fans.

“The tour reintroduced us to a certain breed of music fan and the people whose job it is to keep their worlds alive,” frontman Taylor Goldsmith said. “This show is one of the performances from that tour: The gear is limited, the space is smaller than a normal venue, the material was virtually unknown at the time, but when you’re playing for a group of record store regulars, you know that you’re in good hands.”

“This is a recording of the performance that turned me into a devoted Dawes fan,” said Grimey’s co-owner Doyle Davis. “I had always admired their records for their immaculate construction; tasty yet restrained chops and literate songwriting. But hearing Dawes live for the first time put everything into perspective, convincing me this is one of the finest bands making music today. For what it’s worth, I made a point to catch two more Dawes shows within four months of their Grimey’s performance. That’s how fans are made.”

Dawes will be making the following appearances throughout the remainder of 2013:

Get a 10% discount on tickets at TicketsNow.com

Dawes: Stripped Down at Grimey’s track listing:
01. From A Window Seat
02. Someone Will
03. Time Spent in Los Angeles
04. Most People
05. Something in Common
06. A Little Bit of Everything

SHOULD GAGA BE CRITICIZED OVER NEW SONG "DO WHAT YOU WANT"?