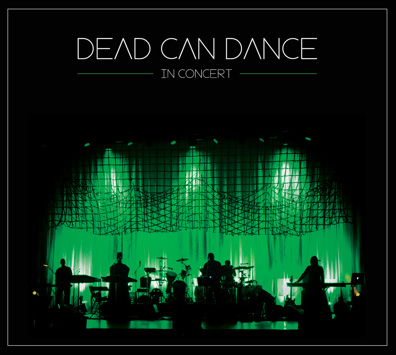 Dead Can Dance will release In Concert through [PIAS] America on April 16th.  In Concert is comprised of a selection of recordings from Dead Can Dance’s 2012 US tour. Available April 16th on CD and an extended digital edition, the release includes songs from Anastasis, the band’s first studio record in 16 years, as well as cuts from the group’s extensive catalog.  A triple LP version is set to be released shortly thereafter.

The band has also announced a string of West Coast dates including a main stage performance at Coachella. Dead Can Dance’s current year-long world tour is their first since 1995 and features 85 shows across 4 continents. Performing to over 400,000 people, the band have appeared at some of the world’s most iconic venues incl. Sydney’s Royal Opera House, London’s Royal Albert Hall and New York’s Beacon Theatre. Dead Can Dance will also make various festival appearances this year and having confirmed slots at Coachella, Primavera and Roskilde.

“I would say without hesitation that this has been the most rewarding tour that we have ever undertaken,” notes Brendan Perry. “On one level it has been an absolute pleasure to perform in such beautiful locations with such a wonderful band and crew, but also to be able to connect on a personal level with the many devoted admirers of our art both old and new. It would seem in our case absence has certainly made the heart grow fonder and it has been an absolute joy to be given the opportunity to be able to share our music in the ultimate setting of the living work”.

On the cover of ‘Anastasis’, Dead Can Dance’s first album in 16 years: a field of sunflowers, ripened, and then blackened, by the sun, standing with sad, slightly crowned heads. Less dead than dormant, the heads and stems will one day be chopped, but then via the roots, will return. For ‘Anastasis’ is the Greek word for ‘resurrection’ and the seemingly dead will dance again.

“I thought ‘Anastasis’ was a good title given our reunion,” explains Brendan Perry, who, with Lisa Gerrard, formed the band in Melbourne, Australia in 1981, releasing seven studio albums, and one live album, before going their own ways after 1996’s ‘Spiritchaser’. “’Anastasis’ also means ‘in between two stages’,” he adds. “Regeneration comes with the next season.”

‘Anastasis’ is perfectly apt given how the album is an astonishing regeneration of the legendary beauty, power and spellbinding nature of the duo’s unique sound and vision. Age hasn’t withered DCD, not the passing of the years; if anything, the album sounds bolder, stronger, more confident in its vision..

A Greek word to represent the album is equally derived from the music’s origins. While Perry can hear echoes of DCD past, “from right across our catalog,” he reckons the core of Anastasis can be found, “slap bang” in the near-Eastern Mediterranean, from Greece and Turkey across to North Africa. “The music I listen to and research becomes both unconsciously and consciously part of a new project, and for this album, I’ve been fascinated by the classic immutable elements of Greek culture, the depth of their music and their love for song that you don’t get as much in the west; the way they combine philosophy and love songs, and throw a bit of science in there too. I love the eastern influence that comes from being a crossroads between east and west, the kaleidoscopic mosaic of those fused cultures, while the further west you go, the more it’s a mono-cultural society.

Perry says the duo have been talking about another album since Dead Can Dance’s world tour of 2005. But that extensive tour was exhausting, and the incentive was lacking, so it was put on the backburner until calendars could again be synchronized – not so easy since Perry lives in the center of Ireland (the land of his ancestors), where ‘Anastasis’ was recorded (at Perry’s converted church studio Quivvy) and Gerrard lives in Southern Australia. Once upon a time, they left Melbourne for London, settling many floors up in a council block on the Isle of Dogs, putting whatever pittance they had into their music.

Signed by 4AD and releasing their first album in 1984, the duo drew rapturous reviews for albums that spanned neo-classical and folk across time and geography, each album selling to a progressively larger audience, the emotional drama of their coming to the attention of the San Francisco ballet, Hermes Perfume and a documentary on Hitler and Stalin; likewise motion pictures such as Heat, The Crossing Guard and Baraka. Gerrard developed her own solo film soundtracks – The Gladiator and The Insider, for example – while Perry worked on solo albums such as 1999’s ‘Eye Of the Hunter’ and 2008’s ‘Ark’. The pair dissolved their physical relationship in the early ‘ 90s but something keeps them together – a bond of deep friendship and musical compatibility and understanding, and so Anastasis is born, and Dead Can Dance regenerated.