After forty years existing as figureheads of rock, Blondie is back with a new album, a world tour and enough buzz to have snagged a number of headlining slots at the South By Southwest music festival this past March. During the 1970s, a crop of seminal rock bands burst onto the downtown New York scene, chief among them Blondie. The band came to embody a new era of genre-melding music, taking elements of new wave and punk, and eventually merging them with pop, rock, reggae and disco. The result was a sound definitively their own. The excitement over the band’s recent rekindling should come as no surprise.

Blondie will be performing at the iTunes Festival on September 16th, 2014 in London.

Co-founder and lead singer Debbie Harry spoke exclusively to The Untitled Magazine about Blondie’s history, their reunion, their new album, and how they all but predicted today’s fusion-heavy musical soundscape. Check out Debbie’s interview, and make sure not to miss the full story, available now in The “Legendary” Issue. Visit our online store to buy your copy, or download the free “Legendary” Issue App on iTunes now!

Indira Cesarine: You’ve been creating music and performing since the seventies; can you tell me who your early influences were and what shaped your sound when you first formed Blondie?

Debbie Harry: Well, I think it was a combination of elements. We really viewed the band as an ensemble collection of different musicians. Each one of us brought influences. Clem was very inspired by the Bay City Rollers and The Beatles. Earlier influences for all of us were people like Buddy Holly and Eddie Cochran. As a guitarist, I think Chris was really influenced by bluegrass players; I think he was greatly enamored of Keith Richards’ playing.  I got a lot of influence from R&B girl groups, and later on moved into more of the rock thing. There really weren’t a lot of girls to copy or imitate.  Of course Janis Joplin, Adored, Grace Slick, and Dusty Springfield.

IC: You’re on your 40th anniversary with Blondie.  Tell me how you first met and formed the band? I understand that you were, for a while, a Playboy bunny and then you met Chris?

DH: I was in a girl group called the Stilettos, and then later on Chris joined, and was playing bass -he’s a terrific bass player as well. Then we branched off and decided we wanted to do more of a rock thing, and that’s what we did. We worked with a couple of different musicians, and we had a couple of different drummers and then we found Clem.  Later, we got Jimmy Destri to play keyboards and synthesizers, and I think that’s what really cemented our sound.

IC: Your sound has always crossed over from Punk to New Wave to Disco. In your own words, how would you define it?

DH: We wanted to have the style of each player come through, and I think that’s what made the sound of Blondie, coupled with the sound of my voice. We considered ourselves an urban band, a New York City band, and we felt the influence of all the different styles of music that were around in the city at the time. According to today’s styles of music, it’s very ordinary that people cross over and add different elements, but back then, it was very strange and very unusual to do it.

IC: Do you remember the first time you performed together as Blondie?

DH: I think we played every weekend for seven months at CBGB’s when it was just a hang out.  It hadn’t been popularized to any great extent; it was just a local bar.

IC: Was there any sort of breakthrough moment?

DH: It was kind of gradual, because there wasn’t a lot of interest in the early days. Everybody wanted to record, and everybody wanted to move up into the business of it, but at that point there was no interest from any labels or managers, so that had to be built up slowly.  It gave everybody a chance to get their shit together, as it were.  So it did happen slowly.

IC: I understand that Andy Warhol photographed you, and you’re using that artwork for your new album. Can you tell me a little bit about how you met Andy Warhol, and that session, and why you chose that particular image?

DH: It’s a beautiful image.  Andy told me I could use it as an album cover, but I never had it in writing, so we had to go through the foundation again and re-negotiate the whole thing.  It’s just a great piece, and it corresponds to what we’ve done. We’ve re-released or re-recorded some of the original songs, so having that album art is indicative of the time period.

IC: Can you tell me about your Blondie Forever, celebrating forty years of music project? I understand it has a greatest hits album, so did you re-record those, or are you just re-releasing them?

DH: I don’t know if we’re going to put out the re-records or the originals, but they are the original songs, and they’re faithfully reproduced, but we just wanted to do a fresher version.

IC: So they’ve been remixed.  Are there going to be any changes to the songs?

DH: We tried to make them as faithful to the originals as possible. The second half of the package is the latest stuff; “Ghosts of Download,” and those songs are really great. I’m very excited about that whole package. We’ve been playing about five of those songs in shows over the past six or seven months, and that’s been going over really well. In addition to that, there’s a DVD we’re putting out of an original live performance at CBGB’s from 1977, and it’s fantastic.

IC: On the greatest hits, do you definitely have “Rapture,” “The Tide is High” and “Heart of Glass”? What are some of the other songs that we should look out for, and how did you make the decision of what to include?

DH: Oh, it seemed pretty obvious. I think I included “Sunday Girl”, “Dreaming” and “Hanging on the Telephone.”  These weren’t necessarily hits in the states. We also included “Call Me,” “Rapture,” Heart of Glass”, and “One Way or Another.”

IC: Do you have any particular favorite that resonates with you?

DH: I’m really proud of “Heart of Glass” and “Rapture” because they were the early crossovers, and they were instrumental in shaping what people did in the future.

IC: So with “Ghosts of Download,” you have twelve new tracks.  Is there a new direction with the music? What can we expect from your new work?

DH: I think the greatest change is probably a Latin influence. Again, Chris has been very interested in Cumbia and Reggaeton, and I don’t think this is new for him.  I think that this is an ongoing influence, and he has always tried to incorporate some of these rhythmic feels instead of just a traditional, straight 4-4. He has a great feeling for some of these more swing things, not a traditional swing, but a Latin or Reggae feel. For me, even on the first album, we had a song called “Man Overboard;” it was not terribly successful, but we did try it.

IC: I understand that you have a lot of exciting collaborations on the album as well; with Beth Ditto, and quite a few others. Can you tell me about some of the people who worked on it with you?

DH: Well, I think everybody knows Beth, and they know Gossip, and what a wonderful singer and musician she is. So, Mad Katz-Bohen, who wrote the song “A Rose by Any Name” said “What do you think about doing a duet?” I said “Great, I love it!” and so we reached out to Beth and she said yes.

IC: I understand you also have a cover of the Frankie Goes to Hollywood song “Relax,” is that right?

DH: Yes, we were doing the song live as part of our encore. It’s such a universal song: everybody in the world knows that song. We started doing it for entertainment value, and did our own version, a little bit more rocking.

IC: Can you tell me about your world tour, Blondie Forever, that you have coming up?

DH: Well, I can’t be entirely specific about it. I know that we’re doing a festival in Europe. We’re definitely doing Glastonbury and we’re doing something outside of Barcelona as well, as in Northern France, and Norway. We just finished doing SXSW, which was pretty great.  It’s wild down there!  I can’t believe what goes on; it’s kind of insane! I think the premise is really great, though.

IC: How did your performance go there?

DH: It was really fun. We did three shows; one was in a real rock club called Stubbs. The other one was in Brazos Hall, and that was more of a rock date, and then we did the Perez Hilton party, which was a real rave.

IC: Who do you feel in the music industry has really inspired you throughout your career and have kept you inspired to keep producing music?

DH: I think my interests and tastes are pretty wide, and I feel fortunate that I am a working musician, and that I’ve maintained an audience through all this time. I think, in a way, we came from a position of counter-culture, and at first we couldn’t get any airplay.  Punk music was looked down on, and then it evolved and people became interested in it. So, coming from that position, it was a more of a fight, and it made us want to keep going.

IC: Looking back, is there anything that you would do differently in regards to your career and the path you chose?

DH: Of course, there are a million things I would do differently! But it’s all hindsight, so it’s practically valueless.  I can’t regret anything, because I’m still working and still doing what I love, and I think I have good credentials through it all.

IC: I know you guys were inducted into the rock and Roll Hall of Fame in 2006. How was that?

DH: I honestly never expected anything like that to happen, but ultimately, it was one of the best things to happen to Blondie, because it legitimized us. A lot of people take notice of something like that.

IC: This is our “Legendary” issue. What, to you, is the definition of legendary?

DH: What would I consider legendary? Well, I guess people that continue on, come hell or high water.  It certainly hasn’t been all fun and games or an easy trip. We’ve definitely had our ups and downs, and we’ve had to fight for our position. I wish that a lot of the people who aren’t working today or who have died would have lasted through. The New York Dolls were spectacular, and I think that Johnny Thunders, had he lived, would be writing some incredible songs. I also really loved Richard Hell and I wish that he was still playing music. Those were artists that, at the time, weren’t really considered commercial, but today they’d be huge.

IC: Are there any words of wisdom or things that you tell yourself when you want to get through those days?

DH: I don’t say it to myself as much as I used to, but I used to say, “Wait for the turnaround.” Because, if you can wait, there will  always be a turnaround.

Interviewed by Indira Cesarine for The Untitled Magazine. 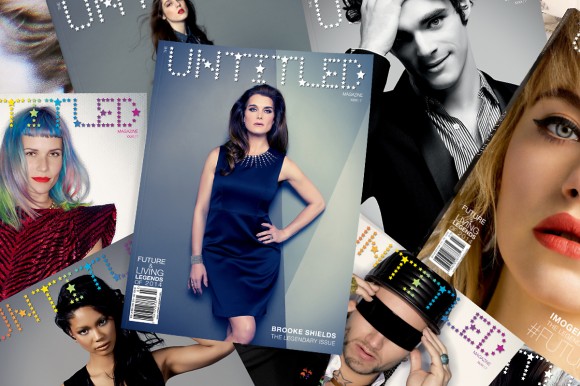