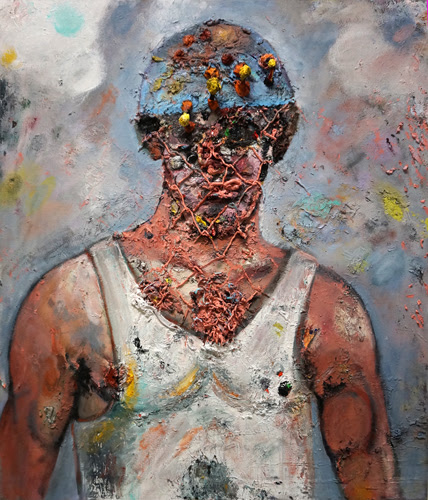 From November 14th to December 21st, the Jack Hanley Gallery in New York will exhibit Detroit, an exhibition of works by three artists with roots in the city: Mary Ann Aitken, John Maggie, and Jonathan Rajewski. All three artists’ work is primarly categorized as painting although their practices encompass a variety of non-traditional painting techniques and materials including caulking, as well as expressive combinations of painting approaches.

Mary Ann Aitken (b. 1960, Detroit, d. 2012, Brooklyn ) grew up in Detroit and attended Wayne State University where in 1983 she received a Bachelors of Fine Arts. Aitken studied and worked among the recognized artists of the Cass Corridor. She continued her education by receiving a Masters in Art Therapy in 1989. During those years she maintained a studio in the Cary Building in downtown Detroit. In the 1980s, she depicted her environment with a heavy palette. Thick layers of paint consumed whatever material she could get her hands on, including linoleum tile, newsprint, cardboard, and used paper. Her rough impressions recorded unconsidered objects and mundane street scenes.

In 1989, Aitken relocated to Brooklyn where she worked as an art therapist in the drug rehabilitation ward of Woodhull Hospital. She exhibited her paintings, drawings, and photographs in several group shows in Brooklyn, New York, as well as Detroit. Her work from 2007–2010, the late period of her life, represents a shift toward abstraction. For more than three decades, Aitken was a voracious artist whose output of painting, works on paper, and mixed media collage was matched by a sense of intention that cut across her varied subjects.

Born in 1978, Detroit-based artist John Maggie employs a variety of painting styles to his sexually suggestive male figures, mixing clean, representational approaches with 3-dimensional applications of pre-dried paint piled on the canvas. The works are often based on images from vintage erotica which the artist uses to transform into absurdist portraits of masculinity. Maggie’s work is currently on view at the Museum of Contemporary Art Detroit as part of its Detroit Affinities series.

Jonathan Rajewski was born in 1986 in Bismarck, North Dakota, and currently lives in Hamtramck, Michigan. He earned a BA in Philosophy from Michigan State University. His work will be featured in forthcoming exhibitions at Re:View Contemporary Gallery (Detroit) and College for Creative Studies, Center Gallery (Detroit).