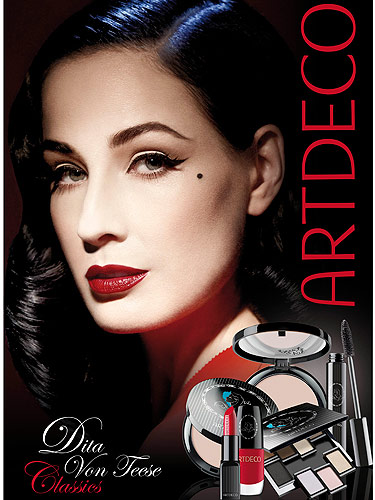 Dita Von Teese’s retro red lips, thick, winged eyeliner, and porcelain skin have long been her personal trademark, but now anyone can get the burlesque siren’s look with her new makeup line for Artdeco, a leading German makeup manufacturer.  The launch of Dita Von Teese’s new line of cosmetics comes just a year after the debut of her eponymous fragrance.  Von Teese said that in the process of designing the makeup she, “…had all liberties to drive the creative process, to influence the development of the textures and colors to make them my signature products. For me it’s important to give more than just my name to a product.”  Von Teese was involved in every step of the process, trying to make a product worthy of her status as a makeup icon.  Since she was a young girl, Von Teese sought to replicate the look of her Hollywood idols, Marlene Dietrich and Rita Hayworth.  She still does her own makeup to this day, explaining that her number one make up tip is, “Practice until you can do every step in the routine without thinking.”  Insuring the quality of her line was crucial for the burlesque star, who can only be caught not wearing makeup when lying in bed.  Von Teese tested the makeup at every stage in the process, experimenting with colors and textures, to guarantee that she was producing only the highest quality makeup.  Anna Blasco- Salvat, marketing director of Artdeco remarked “We have never worked so long or so hard on a product launch.”   At the launch in Munich on April 26, Von Teese also gave a burlesque performance on an oversized, gold powder case demonstrating her signature mix of eroticism and innocence that has held audiences captive the world over.

ACTRESS ELENA SANCHEZ CHATS ABOUT HER LATEST FILMS ROLES, NEW VENTURES AS A PRODUCER, AND THE CHALLENGES OF BEING A STUNT PERFORMER